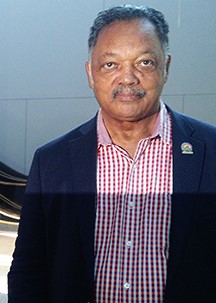 Rev. Jesse Jackson Sr. revealed in a statement Friday that he has been diagnosed with Parkinson’s disease.

The 76-year-old civil rights leader said he had found it difficult to perform routine tasks and after a battery of tests was diagnosed by his physicians with Parkinson’s, a disease that ailed his father.

“My family and I began to notice changes about three years ago. For a while, I resisted interrupting my work to visit a doctor. But as my daily physical struggles intensified I could no longer ignore the symptoms, so I acquiesced,” he said in a statement.

Northwestern Medicine also released a statement saying Jackson was diagnosed with the disease in 2015 and that they had been treating him in an outpatient setting. Northwestern described Parkinson’s as a “progressive degenerative disorder that results from loss of cells in various parts of the brain that control movement.”

U.S. Rep. Danny Davis said he has noticed some symptoms in Jackson, such as a change in his walk and slowed speech.

“It’s a sad day in my life to know that my friend of all these years has reached that stage,” Davis said Friday after a groundbreaking ceremony at the University of Illinois at Chicago campus.

“For 50 years that I’ve known Jesse Jackson, he has been an absolute voice of progressive thought, progressive development, representing the views and needs of the downtrodden. I tell you it’s going to be a great loss if his voice is not able to be heard,” he said.

Jackson, who marched with Dr. Martin Luther King Jr., is the founder and president of the Rainbow PUSH Coalition, a social justice organization headquartered on Chicago’s South Side. He was awarded the Presidential Medal of Freedom by President Bill Clinton in 2000 after he unsuccessfully ran for President in 1984 and 1988.

Jackson said in his statement that grappling with the disease has been difficult.

“Recognition of the effects of this disease on me has been painful, and I have been slow to grasp the gravity of it. For me, a Parkinson’s diagnosis is not a stop sign but rather a signal that I must make lifestyle changes and dedicate myself to physical therapy in hopes of slowing the disease’s progression.”

Mayor Emanuel said his thoughts and prayers are with the Jackson family.

“While Parkinson’s may be a physical condition, it will never, ever break Rev. Jackson’s spiritual commitment to justice and his ability to help continue to be a voice to those whose voices are not heard,” Emanuel said to reporters at UIC.

In Jackson’s statement, he thanked family and friends for their support and said he views the diagnosis as an opportunity to be vocal in the need to find a cure.

“I will need your prayers and graceful understanding as I undertake this new challenge,” the statement said.

Jackson is the father of former U.S. Rep. Jesse Jackson Jr., who was convicted in 2013 in federal court of public corruption charges for misusing campaign funds. Earlier this month, a journalist publicly accused the elder Jackson of sexual harassment.