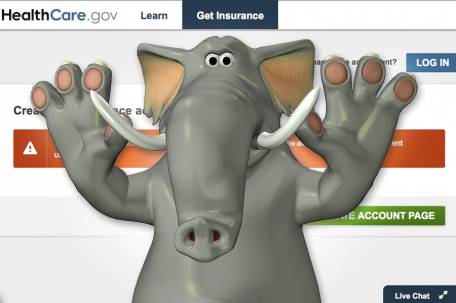 More than 2.2 million African-Americans living below the federal poverty line won’t have access to Obamacare’s insurance benefits due to the slew of states that opted out of the law’s Medicaid expansion.

Had all 50 states expanded Medicaid, 95 percent of uninsured African-Americans would be eligible for some form of federal assistance through the Affordable Care Act coverage—either via Medicaid or premium subsidies—according to a Health and Human Services report released Monday. Instead, only 60 percent will benefit.

In total, 25 states chose not to expand Medicaid, creating a “coverage gap” where some residents earn too much to qualify for the program but not enough to qualify for the tax credits. Those credits are granted to individuals and families earning between 100 and 400 percent of the federal poverty level.

The Affordable Care Act originally required all states to expand Medicaid coverage to Americans earning below 138 percent of the federal poverty line or forfeit their funding for the program altogether, but the Supreme Court deemed that provision unconstitutional. With the decision left to the states, a majority with Republican governors opted out of the expansion, as did three that have Democrats at the helm: Missouri, Montana, and New Hampshire.

Despite only half the states expanding Medicaid, 6.8 million uninsured African-Americans are eligible for Affordable Care Act coverage, with 4.2 million able to receive tax credits or enroll in Medicaid or the Children’s Health Insurance Program.

More than half of all eligible uninsured African-Americans live in families whose income falls below the federal poverty line. Two-thirds of the total eligible population, however, resides in states that opted not to expand Medicaid.

Some 34 percent live in four states—Florida, Georgia, Texas and North Carolina—not expanding Medicaid, with 10 percent in Florida alone. Four in 10 live in just 20 metropolitan cities, with the highest concentrations in Atlanta, New York, and Chicago.

For those who do earn enough to qualify for tax credits, the federal assistance can go a long way. In Jacksonville, Fla., a family of four earning $50,000 a year could purchase a mid-grade plan for as little as $282 per month. Without subsidies, that plan would carry a monthly premium of $709.

A “bronze” plan, the lowest cost option, carries a $36 price tag after subsidies.

HHS estimates 41.3 million Americans are uninsured and eligible for Affordable Care Act coverage. African-Americans make up 16 percent of that population. They also have a higher uninsured rate than the general U.S. population at 20 percent, compared with 16 percent overall.