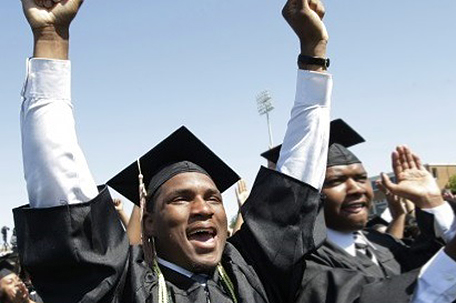 It’s been long documented that African Americans encounter discrimination more than other Americans in the U.S. job market and experience higher levels of unemployment. Among young Black adults, the tendency toward higher rates of joblessness has remained pronounced despite the national unemployment rate falling from a recession high of 10.2 percent in 2009 to 6.1 percent last month. The June 2014 unemployment rate among African Americans age 18 to 34 was 16.7 percent; unemployment among whites between 18 and 34 hit 7.6 percent, according to U.S. Labor Department and Census Bureau data.

In “Closing the Race Gap: Alleviating Young African American Unemployment Through Education,” a research report that examines the link between race and education, researchers with the Washington-based Young Invincibles advocacy organization have found that, while young Black adults at all education levels experience higher unemployment rates than others, such employment gaps diminish considerably as Black educational attainment increases.

In a striking example cited in the report, young African American adults need to have earned an associate’s degree to have the same job prospects as young white adults who have only earned a high school diploma. In addition, an African-American male needs some college credit to have a similar prob-ability of employment as a white male high school dropout, the report says.

“We found that young African-Americans have a lower probability [than others] of having a job at every level of education. In fact, young African-Americans need two more levels of education to have the same chance at landing a job as their white peers,” said Young Invincibles research and policy manager Tom Allison this past Thursday during a news media conference call that included U.S. Senator Mary Landrieu, D-La.

Landrieu participated in the news media call to talk about the Creating Higher Education Affordability Necessary to Compete Economically (CHANCE) Act that she has introduced in the U.S. Senate. The legislation is expected to help close the employment gap between white and African-American young adults by making college more affordable and accessible. If enacted, the CHANCE Act would restore the original purchasing power of the Pell Grant annual award by increasing it to $8,900 from $5,730.

“So, you think about that investment [for an African-American] just to have the same chance of having a job as a white high school graduate. … This is really statistical evidence that African-Americans really do need to work twice as hard to compete in this country,” he said.

The report lays out policy recommendations largely aimed at Congress as it seeks to reauthorize the Higher Education Act. The report’s recommended policy solutions, including Landrieu’s proposed CHANCE Act, focus largely “on ways to foster higher educational attainment among all young people, but particularly among students of color.”

With more education, the employment gap significantly diminishes as African Americans earn college and graduate degrees. “An African-American male with a bachelor’s degree is only five percentage points less likely to have a job than a white male bachelor’s degree holder. An African-American female with a bachelor’s is only three percentage points less likely to be employed than a similarly educated white woman. … Among professional degree holders, the racial gap between races is virtually erased,” according to the report.

“This data is compelling,” Landrieu said in describing the Closing the Race Gap report and the challenge it presents. “I’m very proud to have introduced the CHANCE Act, which seeks to address one aspect of this great challenge and that is to increase the value of the Pell Grant.”

Dr. Terri Friedline, an assistant professor of social welfare at the University of Kansas, said she believes the Closing the Race Gap report is providing timely and fresh analysis on the dilemma of African American unemployment. The report’s push for increased educational attainment by African-Americans “makes a good point that, while there are still disparities in [employment] access … education does pay out,” said Friedline, who conducts research aimed at improving young people’s economic and educational well-being.