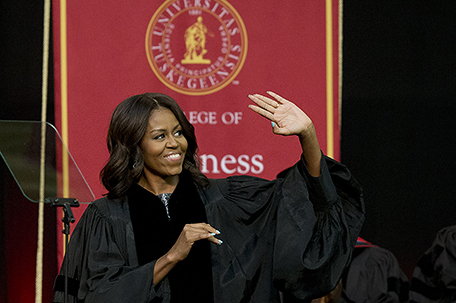 ABOVE PHOTO:  First lady Michelle Obama waves towards the crowd after walking out on stage just before she delivers the commencement address at Tuskegee University, Saturday, May 9, 2015, in Tuskegee, Ala. (AP Photo/Brynn Anderson)

MRS. OBAMA: Thank you all.   Thank you so much.   Let’s let our graduates rest themselves. You’ve worked hard for those seats!

Let me start by thanking President Johnson for that very gracious introduction, and for awarding me with this honorary degree from an extraordinary institution. I am proud to have this degree — very proud.   Thank you. Thank you so much.

I want to recognize Major General Williams; Congresswoman Sewell; Zachary; Kalauna; to all of the trustees, the faculty, the staff here at Tuskegee University. Thank you — thank you so much for this warm welcome, this tremendous hospitality. And I’m so glad to be here.

Before I begin, I just want to say that my heart goes out to everyone who knew and loved Eric Marks, Jr. I understand he was such a talented young man, a promising aerospace engineer who was well on his way to achieving his dream of following in the footsteps of the Tuskegee Airmen. And Eric was taken from us far too soon. And our thoughts and prayers will continue to be with his family, his friends, and this entire community.

I also have to recognize the Concert Choir. Wow, you guys are good! Well done! Beautiful song. And I have to join in recognizing all the folks up in the stands — the parents, siblings, friends — (applause) — so many others who have poured their love and support into these graduates every step of the way. Yeah, this is your day.   Your day.

Now, on this day before Mother’s Day, I’ve got to give a special shout-out to all the moms here.   Yay, moms! And I want you to consider this as a public service announcement for anyone who hasn’t bought the flowers or the cards or the gifts yet — all right? I’m trying to cover you. (Laughter.) But remember that one rule is “keep mom happy.” (Laughter.) All right?

And finally, most of all, I want to congratulate the men and women of the Tuskegee University Class of 2015!   T-U!

MRS. OBAMA: I love that. We can do that all day.  I’m so proud of you all. And you look good. Well done!

You all have come here from all across the country to study, to learn, maybe have a little fun along the way — from freshman year in Adams or Younge Hall — to those late night food runs to The Coop.   I did my research.   To those mornings you woke up early to get a spot under The Shed to watch the Golden Tigers play.   Yeah! I’ve been watching!  At the White House we have all kinds of ways. (Laughter.)

And whether you played sports yourself, or sang in the choir, or played in the band, or joined a fraternity or sorority — after today, all of you will take your spot in the long line of men and women who have come here and distinguished themselves and this university.

You will follow alums like many of your parents and grandparents, aunts and uncles — leaders like Robert Robinson Taylor, a groundbreaking architect and administrator here who was recently honored on a postage stamp.   You will follow heroes like Dr. Boynton Robinson —  who survived the billy clubs and the tear gas of Bloody Sunday in Selma. The story of Tuskegee is full of stories like theirs — men and women who came to this city, seized their own futures, and wound up shaping the arc of history for African Americans and all Americans.

And I’d like to begin today by reflecting on that history — starting back at the time when the Army chose Tuskegee as the site of its airfield and flight school for black pilots.

Back then, black soldiers faced all kinds of obstacles. There were the so-called scientific studies that said that black men’s brains were smaller than white men’s. Official Army reports stated that black soldiers were “childlike,” “shiftless,” “unmoral and untruthful,” and as one quote stated, “if fed, loyal and compliant.”

So while the Airmen selected for this program were actually highly educated — many already had college degrees and pilots licenses — they were presumed to be inferior. During training, they were often assigned to menial tasks like housekeeping or landscaping. Many suffered verbal abuse at the hands of their instructors. When they ventured off base, the white sheriff here in town called them “boy” and ticketed them for the most minor offenses. And when they finally deployed overseas, white soldiers often wouldn’t even return their salutes.

Just think about what that must have been like for those young men. Here they were, trained to operate some of the most complicated, high-tech machines of their day — flying at hundreds of miles an hour, with the tips of their wings just six inches apart. Yet when they hit the ground, folks treated them like they were nobody — as if their very existence meant nothing.

Now, those Airmen could easily have let that experience clip their wings. But as you all know, instead of being defined by the discrimination and the doubts of those around them, they became one of the most successful pursuit squadrons in our military.   They went on to show the world that if black folks and white folks could fight together, and fly together, then surely — surely — they could eat at a lunch counter together. Surely their kids could go to school together.

You see, those Airmen always understood that they had a “double duty” — one to their country and another to all the black folks who were counting on them to pave the way forward.   So for those Airmen, the act of flying itself was a symbol of liberation for themselves and for all African Americans.

One of those first pilots, a man named Charles DeBow, put it this way. He said that a takeoff was — in his words — “a never-failing miracle” where all “the bumps would smooth off… [you’re] in the air… out of this world… free.”

And when he was up in the sky, Charles sometimes looked down to see black folks out in the cotton fields not far from here — the same fields where decades before, their ancestors as slaves. And he knew that he was taking to the skies for them — to give them and their children something more to hope for, something to aspire to.

And in so many ways, that never-failing miracle — the constant work to rise above the bumps in our path to greater freedom for our brothers and sisters — that has always been the story of African Americans here at Tuskegee.

Just think about the arc of this university’s history. Back in the late 1800s, the school needed a new dormitory, but there was no money to pay for it. So Booker T. Washington pawned his pocket watch to buy a kiln, and students used their bare hands to make bricks to build that dorm — and a few other buildings along the way.

A few years later, when George Washington Carver first came here for his research, there was no laboratory. So he dug through trash piles and collected old bottles, and tea cups, and fruit jars to use in his first experiments.

Generation after generation, students here have shown that same grit, that same resilience to soar past obstacles and outrages — past the threat of countryside lynchings; past the humiliation of Jim Crow; past the turmoil of the Civil Rights era. And then they went on to become scientists, engineers, nurses and teachers in communities all across the country — and continued to lift others up along the way.

And while the history of this campus isn’t perfect, the defining story of Tuskegee is the story of rising hopes and fortunes for all African Americans.

And now, graduates, it’s your turn to take up that cause. And let me tell you, you should feel so proud of making it to this day. And I hope that you’re excited to get started on that next chapter. But I also imagine that you might think about all that history, all those heroes who came before you — you might also feel a little pressure, you know — pressure to live up to the legacy of those who came before you; pressure to meet the expectations of others.

And believe me, I understand that kind of pressure.   I’ve experienced a little bit of it myself. You see, graduates, I didn’t start out as the fully-formed First Lady who stands before you today. No, no, I had my share of bumps along the way.

Back when my husband first started campaigning for President, folks had all sorts of questions of me: What kind of First Lady would I be? What kinds of issues would I take on? Would I be more like Laura Bush, or Hillary Clinton, or Nancy Reagan? And the truth is, those same questions would have been posed to any candidate’s spouse. That’s just the way the process works. But, as potentially the first African American First Lady, I was also the focus of another set of questions and speculations; conversations sometimes rooted in the fears and misperceptions of others. Was I too loud, or too angry, or too emasculating?   Or was I too soft, too much of a mom, not enough of a career woman?

Then there was the first time I was on a magazine cover — it was a cartoon drawing of me with a huge afro and machine gun. Now, yeah, it was satire, but if I’m really being honest, it knocked me back a bit. It made me wonder, just how are people seeing me.