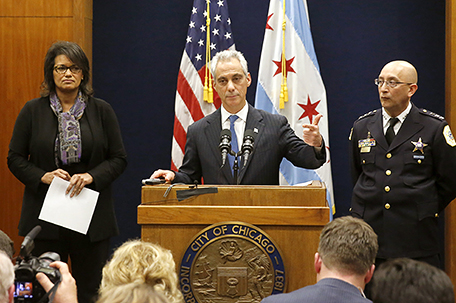 ABOVE PHOTO:  Chicago Mayor Rahm Emanuel responds to a question after announcing the appointment of Sharon Fairley, left, as leader of the Independent Police Review Authority, Monday, Dec. 7, 2015, during a news conference in Chicago. Officials have been criticized for the handling of the 2014 fatal shooting of a black teenager by a white Chicago police officer. At right is Interim Chicago Police Superintendent John Escalante.  The shootings came amid ongoing scrutiny of police across the country after a series of deaths of African Americans at the hands of officers gave rise to the Black Lives Matter movement. (AP Photo/Charles Rex Arbogast)

CHICAGO — Grieving relatives and friends of two people shot and killed by Chicago police said Sunday that the city’s law enforcement officers had failed its residents.

Jones was hit accidentally by the gunfire, the police said. Both victims were black.

Jacqueline Walker, a friend of Jones, asked why police “shoot first and ask questions later.” Police should use stun guns or other nonlethal methods instead, Walker said at a news conference outside the West Side residence where the victims lived.

Officers who responded to a 911 call “were confronted by a combative subject resulting in the discharging of the officer’s weapon,” the Chicago Police Department said in a statement Saturday.

“The 55-year-old female victim was accidentally struck and tragically killed,” according to the statement, which extended “deepest condolences to the victim’s family and friends.”

Jones, a mother of five who had hosted family for Christmas, and LeGrier, a college student home for holiday break, were pronounced dead at hospitals, according to relatives and the Cook County medical examiner’s office.

LeGrier’s mother, Janet Cooksey, told reporters that the Chicago Police Department has failed her and so many others. She said she has seen other families who lost their loved ones to police shootings, and now it has happened to her.

The shootings came amid ongoing scrutiny of police across the country after a series of deaths of African Americans at the hands of officers gave rise to the Black Lives Matter movement.

Speakers at the news conference said Mayor Rahm Emanuel needs to improve the situation with police, but others who spoke called for him to resign.

Police did not immediately disclose the race of the officer, saying only that the officers involved will be placed on administrative duties for 30 days while “training and fitness for duty requirements can be conducted.” It isn’t clear how many officers responded, how many used their firearms and how many times both LeGrier and Jones were struck.

IPRA spokesman Larry Merritt also declined comment. He said Saturday it was “very early on in the investigation” and couldn’t release further details.

The Chicago Police Department also is under a federal civil rights investigation that will look into patterns of racial disparity in the use of force, how the department disciplines officers and handles misconduct accusations.

That investigation was launched after last month’s release of police dashcam video showing white officer Jason Van Dyke shooting black 17-year-old Laquan McDonald 16 times in 2014. The video’s release has led to protests, the forced resignation of Chicago Police Superintendent Garry McCarthy and calls from residents for Mayor Rahm Emanuel to step down. It is not clear whether there are any video recordings of Saturday’s shootings.

A prayer vigil for Jones was scheduled for later Sunday.

“This family is absolutely devastated,” the Rev. Marshall E. Hatch of a West Garfield Park church said, adding that the shooting showed how “deeply dysfunctional the relationship is between this department and its citizens.”

LeGrier’s father told the Chicago Sun-Times he had invited his son to a family holiday gathering before the shooting but the younger man chose not to go. Antonio LeGrier said when he returned to his second-floor apartment early Saturday, his son appeared to be a “little agitated.”

The elder LeGrier said he heard loud banging on his locked bedroom door around 4:15 a.m. and that his son said, “You’re not going to scare me.” He said his son tried to bust the door open, but he kept him from doing so and called police. The father told the newspaper that he called Jones, who lived a floor below, and warned her that his son was a “little irate” and not to open the door unless police arrived. He said Jones told him she saw his son outside with a baseball bat.

When police arrived, Antonio LeGrier said he heard Jones yell, “Whoa, whoa, whoa!” He said he heard gunshots as he made his way down from the second floor and saw his son and Jones lying in the foyer.

“I identified myself as the father and I held my hands out,” he said.

Jones’ daughter, Latisha, told the Sun-Times and Chicago Tribune that she woke up when she heard gunshots, walked to the front door and saw her mother bleeding on the ground.

It isn’t known when the medical examiner’s office will do autopsies, which would determine how many times LeGrier and Jones were shot.

Antonio LeGrier said police later told him that Quintonio LeGrier was shot seven times, and that he had called 911 before his father did.

LeGrier said the Sun-Times that his son had emotional problems after spending most of his childhood in foster care. LeGrier described his son as a “whiz kid” and said he was home on break from Northern Illinois University, where he majored in electrical engineering technology.

Emanuel’s office issued a statement late Saturday that said the IPRA would share its evidence with the county prosecutor’s office.

“Anytime an officer uses force the public deserves answers, and regardless of the circumstances, we all grieve anytime there is a loss of life in our city,” Emanuel said in the statement.

Bettie Jones’ brother, Melvin Jones, told the Tribune that his sister celebrated “an excellent” Christmas at her apartment with about 15 other relatives. He said she lived there with her boyfriend.

“There are so many questions and no answers,” Melvin Jones said. “I’m numb right now. Right now there’s a whole lot of anger, a whole lot of tears. … I don’t have time to feel. I have a funeral to prepare.”