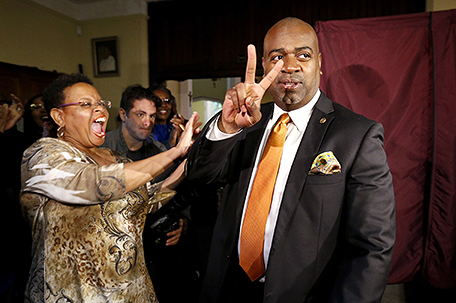 Baraka, who served on Newark’s City Council, was a staunch critic of Booker, who stepped down last year to run for the Senate. He declared victory with nearly all districts counted and with a 54 percent to 46 percent lead over former state assistant attorney general Shavar Jeffries.

Baraka inherits a fiscal crisis that has left Newark in danger of being subject to state monitoring.

His supporters held a raucous celebration at a downtown hotel after he announced his victory.

Speaking to the crowd, Baraka wished his mother a Happy Mother’s Day and said he knew his father, who died in January, was “in the room tonight.” He urged the crowd to “be the mayor” and work for positive change, a reference to one of his campaign slogans, “When I become mayor, we become mayor.”

“We have a great city, an international city,” he said. “Watch out, America, here comes Newark!”

Baraka and Jeffries are Democrats, but the election was nonpartisan. The race featured an expensive television advertising fight in recent weeks. State monitors were on hand to ensure a fair election.

Baraka, whose father extended the political debates of the civil rights era to the arts world, had the support of the labor-connected New Jersey Working Families organization, which paid for ads accusing Jeffries of being a pawn of moneyed outside interests.

Jeffries, a former Newark school board president who’s now a law professor at Seton Hall University, had the support of the independent Newark First organization. His ads accused Baraka of voting to increase his pay while laying off police officers in Newark, where murders spiked to a 10-year high last year.