Rangel celebrates though primary too close to call 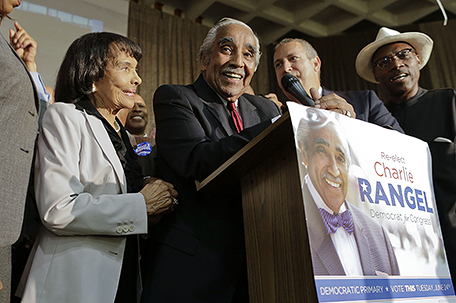 NEW YORK — U.S. Rep. Charles Rangel, the 84-year-old “Lion of Harlem,” took the stage on his final primary night before a victory had been declared, saying he wanted to “sweat it out” with his supporters in a Harlem ballroom.

What followed was an unprecedented nearly hour-long, folksy speech that was part thank-you, part real-time political analysis and, eventually, part declaration of victory even though the race between the 22-term congressman and his challenger state Sen. Adriano Espaillat was still officially too close to call early Wednesday.

With 99 percent of the vote counted in unofficial results, Rangel was leading Espaillat 47.4 percent to 43.7 percent, a difference of less than 2,000 votes. About 47,000 votes were counted on Tuesday.

The Associated Press is not declaring a winner because the city Board of Elections was not able say how many absentee and affidavit ballots were still outstanding. The Board said no further information on those ballots would be immediately released.

Rangel, the face of Harlem politics for generations, showed no such reluctance to bring the drama-filled campaign to a close.

“This was your victory,” Rangel told the crowd. “This is your congressman. And you can rest assured all I will be doing is thinking about you and bringing resources back home.”

At one moment during his rambling address, the stage buckled under the weight of the congressman and more than a dozen elected officials who wanted to stand near the candidate. After determining that no one was hurt, Rangel resumed talking. And talking.

Acknowledging that he was “killing time” as the votes were being counted, Rangel held court, continually introducing new speakers and asking his advisers and members of the press for updates on the latest totals.

Finally, after a local TV station called the race, balloons dropped from the ceiling. Rangel raised his arms aloft and smiled.

But upon leaving the stage, Rangel was slightly more cautious in addressing reporters, saying he was “confident” that his margin of victory would hold but resisting a full-throated reiteration of his victory cry.

Espaillat, who is bidding to become the first person born in the Dominican Republic to be elected to Congress, refused to concede. He told supporters that the “race was too close to call” and his campaign said that several thousand absentee and provisional ballots remained uncounted.

And even as Espaillat’s stage was quickly dismantled and his party emptied out, the possibility of a legal challenge was raised, which could lead to a sequel to the 2012 primary between the two men. The result of that race, which Rangel won by barely 1,000 votes, took two weeks to finalize.

Rangel was once arguably the most influential black elected official in the U.S., known for his gravelly voice, impeccable suits and staunch liberal views, including his outspoken opposition to apartheid and the Iraq War.

But he was weakened after 2010 ethics violations that forced him to give up the chairmanship of the powerful House Ways and Means Committee, and his heavily Democratic district was then redrawn to include parts of the Bronx, which along with the accelerating gentrification of Harlem transformed a heavily black district into one that was majority Hispanic.

Rangel: ‘Don’t leave me swinging in the wind’