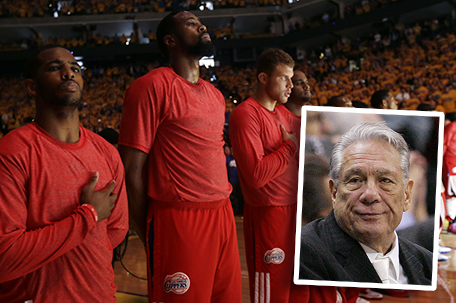 ABOVE PHOTO:  Members of the Los Angeles Clippers listen to the national anthem before Game 4 of an opening-round NBA basketball playoff series against the Golden State Warriors on Sunday, April 27, 2014, in Oakland, Calif. The Clippers chose not to speak publicly about owner Donald Sterling. Instead, they made a silent protest. The players wore their red Clippers’ shirts inside out to hide the team’s logo.  (AP Photo/Marcio Jose Sanchez) INSERT:  LA Clippers owner Donald Sterling  (AP Photo/Mark J. Terrill)

Donald Sterling is being exiled for racist views shared in private.

America cherishes its freedom of thought and speech. But Sterling’s comments were so nakedly bigoted that demands intensified for the Los Angeles Clippers owner to pay a heavy price for his views, even though they were taped during a private conversation with his girlfriend.

NBA Commissioner Adam Silver heeded the demands and delivered one of the harshest penalties in the history of U.S. sports: a lifetime ban from the league and a $2.5 million fine. Despite Sterling’s donations to black causes and the rich contract he gave the game’s top black coach, Silver also promised to convince owners to force a sale of the Clippers over the 80-year-old Sterling’s “hateful” demands for his 31-year-old girlfriend not to broadcast her association with black people.

“He has a right to his beliefs, to his thoughts. He has a right to free speech. He doesn’t have a right to be an owner of an NBA franchise,” said Dr. Harry Edwards, a scholar of race and sports who has worked as a consultant for several professional teams.

“We can’t remove racism from American society any more than we can remove murder,” Edwards said. “But just because we can’t remove it, that doesn’t mean we shouldn’t fight it.” 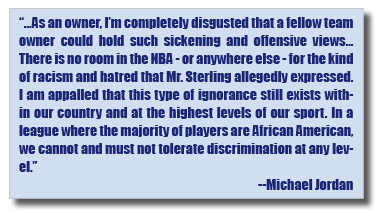 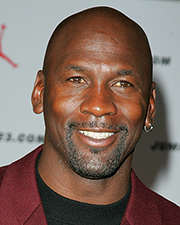 Wayne Embry fought racism for decades, by refusing to let it defeat him. Drafted into the NBA in 1958, when quotas limited the number of black players, he was the only African-American on the Cincinnati Royals, and later became the NBA’s first black general manager. He wrote the book “Inside Game: Race, Power and Politics in the NBA.”

He thinks that Sterling’s punishment is appropriate, and sends a powerful statement: “Such ignorance cannot and will not be tolerated.”

“Not just in the NBA,” said Embry, who now works in the Toronto Raptors’ front office, “but it’s an important message to send throughout society.”

A variety of factors converged to extend the fight against racism into the heart and mind of Donald Sterling.

Racism is often deniable these days, because it has become more subtle and complex than the blatant oppression of the past, and because race is a common political tool. So when Sterling provided such a rare and obvious example of bigotry, it sparked a sort of feeding frenzy.

“In general, people in society tend to be very dismissive of claims of racism unless it is really overt. Short of a Klan rally, people generally won’t accept charges of racism,” said Todd Boyd, a USC professor who studies race and sports and is author of the NBA book “Young, Black, Rich and Famous.”

Boyd noted that Sterling had escaped basically unscathed despite years of racial missteps. The billionaire had paid a $2.76 million settlement to resolve a federal lawsuit accusing him of systematically excluding blacks and Hispanics from his rental properties. A wrongful termination lawsuit by general manager Elgin Baylor described various slurs and slights. 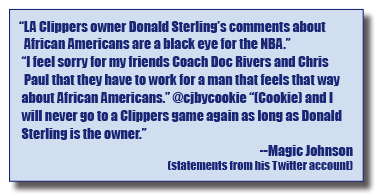 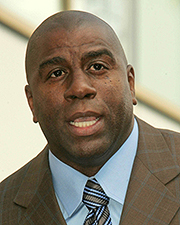 Sterling won the Baylor case. As his racial problems mounted over the years, he donated enough money to black causes to receive two lifetime achievement awards from the NAACP. He hired Doc Rivers, one of the NBA’s top coaches, and gave him GM powers and a contract worth $7 million per year.

Still, when an audio recording of Sterling’s comments was leaked, with Sterling telling his girlfriend things like, “it bothers me a lot that you want to broadcast that you’re associating with black people,” it provided an easy opportunity to address a longstanding issue.

“What bothers me about this whole Donald Sterling affair isn’t just his racism,” he wrote on Time magazine’s website. “I’m bothered that everyone acts as if it’s a huge surprise.”

Boyd also sensed some opportunism among those calling for Sterling’s ouster.

“When something like this comes out and it’s so blatant, it’s embarrassing for a lot of people who want to believe that they live in a society where racism doesn’t exist,” he said. “A lot of them might be white; a lot might also be black.”

“There also are a lot of African-Americans in society who, it’s almost as though they’re waiting for moments like this to prove their blackness,” Boyd continued. “It gives them an opportunity to say, I’m protesting, I’m boycotting. Get this racist out. It sort of gives their life meaning.”

Sterling presented such a huge and rare target, few people stopped to wonder whether punishing someone for private thoughts, instead of actions, was a good idea. What would then prevent other opinions from being targeted? 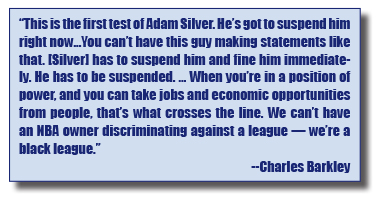 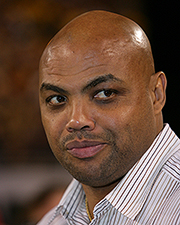 Mark Cuban, owner of the NBA’s Mavericks, was among the few.

“But regardless of your background, regardless of the history they have, if we’re taking something somebody said in their home and we’re trying to turn it into something that leads to you being forced to divest property in any way, shape or form, that’s not the United States of America. I don’t want to be part of that,” he said.

And yet he was: After Silver handed down the punishment, and said it was based only on the audiotape and not Sterling’s history, Cuban tweeted that he agreed with the decision “100%.”

So Sterling is banished. He did not release any comment on the decision Tuesday. Sterling is a lawyer, and he has survived a U.S. government lawsuit accusing him of racist actions.

He may not go quietly after getting banned for racist thoughts.