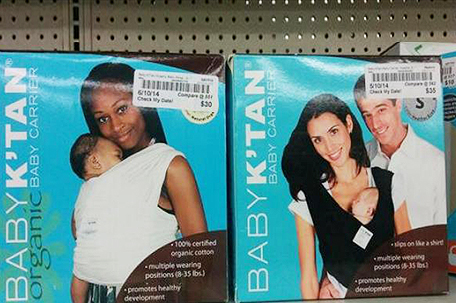 ABOVE PHOTO:  Photo on newsone.com

The white woman has a smiling White man behind her to complete the family portrait.

The backlash was instantaneous, with Twitter users claiming that Baby K’Tan was trafficking in racist stereotypes about the black family, particularly black women.

Baby K’Tan quickly responded to what it characterizes as a “misrepresentation”:

It has come to our attention that there is a misleading photo circulating around the internet. Our company takes these matters very seriously and wishes to address them without any further delay.

1) We have a total of 5 different products, each featuring a different image on the front of the packaging. One box has the Caucasian couple on the front, and the other four boxes have individual mothers with their babies on the front (including African American and Caucasian women).

2) The Baby K’tan product featuring the African American woman is from our organic line which should actually be priced higher than the other product displayed.

3) The couple considered to be Caucasian is actually in fact an international couple, featuring a Caucasian mom and a Hispanic dad.

Our company was built and has prospered because of our focus on diversity and inclusion. We wholeheartedly reject any false, unfounded and baseless claims of discrimination as depicted in the above misrepresentation. We here at Baby K’tan fully support exposing any unfair and inaccurate stereotypes, racism and/or discrimination wherever it may exist.

We plan to continue including diverse parents, both individually and as couples, throughout our images. In fact, we are proud to have such wholesome and loving caregivers as the faces of our company.