Racist Airbnb host to Black guests: ‘Which monkey is going to stay on the couch?’ 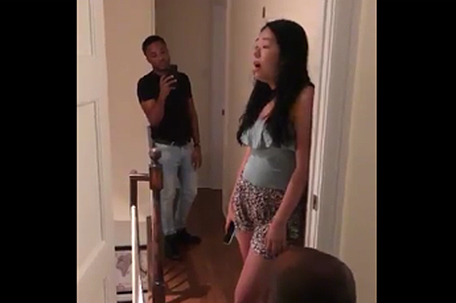 Airbnb has removed a racist host from its website after a viral video exposed the woman’s bias toward a group of Black guests in New York City. A representative for the online platform sent an email to NewsOne stating that the host was removed from the platform.

The swift action came after the video showed the unidentified Asian woman using the word “monkey” in a derogatory reference to Meshach Cisero and his friends.

“The language used in this video is unacceptable and has no place in the Airbnb community,” the statement said. “We have a strict nondiscrimination policy, which we are enforcing to remove the host from our platform. We are supporting Mr. Cisero and his friends in getting them a new place to stay through our Open Doors policy. We’re thankful to them for bringing this to our attention so we could take action.”

The Open Doors policy makes sure guests facing discrimination are able to have an alternate place to stay.

“[I]f a Guest anywhere in the world feels like they have been discriminated against in violation of our policy – in trying to book a listing, having a booking canceled, or in any other interaction with a host – we will find that Guest a similar place to stay if one is available on Airbnb, or if not, we will find them an alternative accommodation elsewhere,” the policy states in part.

Cisero explained the incident on Twitter, saying he and his friends were put out of an AirBnB at 2:30 a.m. He accused her of racial profiling them. He said they were called criminals, monkeys and said she “felt threatened.”

Airbnb responded in Cisero’s comment section ,writing, “We’re so sorry to hear this, Airbnb does not condone discrimination in any way. You can view our Anti-Discriminatory Policy here, http://abnb.do/6010EW8Ys. We’d like to follow up on this, could you please send us a DM providing additional information? Thank you.”

AirBnB has had several racist incidents connected to it since it was founded in 2008. In April 2018, police confronted Donisha Prendergast, the granddaughter of Bob Marley, and her two friends while leaving an Airbnb home in California. Neighbors of the Airbnb host who had rented a house to Prendergast and her friends called the cops on them. This is just one of many such confrontations.

In 2017, the NAACP partnered with the company to recruit Black hosts, increase workplace diversity and create economic opportunities for communities of color. In addition, Airbnb created a damage control method that involves a policy amendment which prohibits rental hosts from seeing the photos of potential guests until after they have accepted a booking. Essentially, the policy will dissuade against hosts being able to learn the race of guests from their photos when considering bookings. In this way, the rule will encourage  fair decisions about who will rent homes.

Guests are not required to share photos of themselves as part of the online home-sharing site’s policies. But now, hosts have the option to ask for photos only after they make rental agreements.

“We have listened to our community, and while most guests provide a photo, some guests told us they don’t want to share a picture of themselves when booking,” the San Francisco-based online home-sharing company said in a news release on Monday. “We also recognize that concerns have been raised about the potential for photos to be misused in a way that violates our nondiscrimination policy.”

Marriott to compete with Airbnb expanding further into home-sharing, takes reservations this week