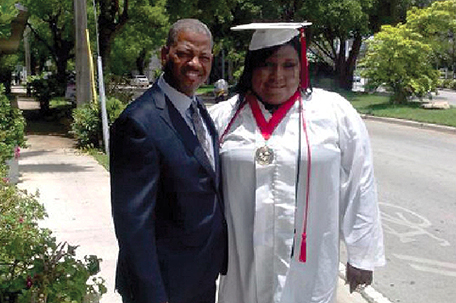 ABOVE PHOTO:  Rachel Jeantel graduates high school, as she promised her friend Trayvon Martin she would before his death.     (Courtesy eurweb.com/rachel jeantel)

She’s come a long way from the girl ridiculed by people throughout social media and who was even asked by defense attorney Don West if she understood english.

In her hometown of  Miami, less than three miles from where her friend Trayvon Martin is buried, Rachel Jeantel was presented her high school diploma Friday. She said graduating was fulfilling a promise she made to him before his death. The moment was made extra special by the attendance of Sybrina Fulton, Martin’s mother.

“Her coming is like having Trayvon there saying, ‘You did it. You proved people wrong,’” Jeantel said. Yahoo News reported:

Jeantel was talking on the phone with Martin, 17, in the last moments of his life on Feb. 26, 2012. The unarmed black teenager was shot and killed by George Zimmerman, then 28, as the two fought on a dark neighborhood sidewalk in a gated community in Sanford, Florida. The case roused a national conversation about racial profiling, self-defense, gun control, vigilantism, civil rights and more.

Her voice resounds with confidence.

She also earned her driver’s license a few months ago and is looking for a job. The plan is for Jeantel to continue working with tutors on precollege curriculum before enrolling at a university. Becoming a clothing designer could be in her future.

Crossing the stage on Friday “is just the beginning of my life,” Jeantel said.

“When people see Rachel Jeantel now, I want them to say, ‘Wow, there was something good that came out of something so tragic,’” Vereen said.

Trayvon Martin’s stepmother speaks out: ‘They ignore me… But I raised him’