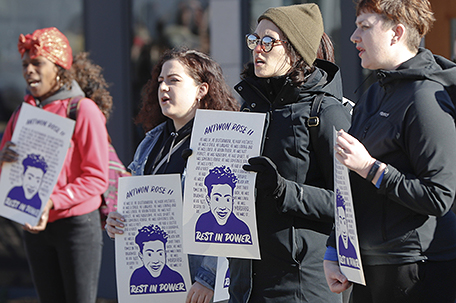 ABOVE PHOTO: Marchers hold posters depicting Antwon Rose II as they gather near the campus of the University of Pittsburgh, Saturday, March 23, 2019. The group called for justice the day after former East Pittsburgh police officer Michael Rosfeld was acquitted in the homicide trial where he was charged with shooting and killing 17-year-old Antwon Rose II last summer near Pittsburgh. (AP Photo/Keith Srakocic)

PITTSBURGH — The father of a slain Black teenager pleaded for peace Saturday after the acquittal of a white police officer triggered an apparent retaliatory shooting at the defense attorney’s office and touched off protests in the streets of Pittsburgh.

The verdict late Friday in the deadly shooting of 17-year-old Antwon Rose II angered his family and civic leaders and prompted hundreds of people to gather Saturday afternoon at an intersection called Freedom Corner in the Hill District neighborhood, the historic center of Black cultural life in Pittsburgh. One man held a sign with the names of black men killed by police around the U.S.

“It’s very painful to see what happened, to sit there and deal with it,” Rose’s father, Antwon Rose Sr., told the crowd. “I just don’t want it to happen to our city no more.”

Afterward, he told reporters: “I want peace, period, all the way around. … Just because there was violence doesn’t mean that we counter that with violence.”

The mostly White crowd then marched through downtown Pittsburgh and other city neighborhoods, periodically blocking streets as they chanted, “Who did this? Police did this!” The protest soon moved onto the University of Pittsburgh campus. Police reported no immediate arrests or injuries.

Early Saturday, five to eight shots were fired into the building where the officer’s attorney, Patrick Thomassey, works, police in nearby Monroeville said. No one was hurt. Police said they had been staking out the place as a precaution, and the gunfire erupted after they left to answer another call around midnight.

Former East Pittsburgh police Officer Michael Rosfeld had been charged with homicide for shooting Rose as the unarmed teenager ran away from a traffic stop in June. Rosfeld testified that he thought Rose or another suspect had a gun pointed at him and that he fired to protect himself and the community.

“I hope that man never sleeps at night,” Rose’s mother, Michelle Kenney, said of Rosfeld after the verdict, according to the Pittsburgh Post-Gazette. “I hope he gets as much sleep as I do, which is none.”

Rose’s family is now pressing ahead with a federal civil rights lawsuit filed against Rosfeld and East Pittsburgh, a small municipality about 10 miles (16 kilometers) from downtown Pittsburgh, where the trial was held.

Attorney S. Lee Merritt, who represents Rose’s mother in the litigation, said the verdict was based on Pennsylvania law regarding the use of force that he considers unconstitutional.

“The protest is an appropriate response to injustice,” Merritt said, adding that he believes the state law is why jurors reached their verdict of acquittal.

He also called the shots at Rosfeld’s attorney’s office “an act of cowardice and barbarism that does nothing but perpetuate the stereotypes often used to justify police brutality.”

Thomassey told reporters after the verdict that Rosfeld is “a good man, he is.” The defense attorney said he hopes the city remains calm and “everybody takes a deep breath and gets on with their lives.”