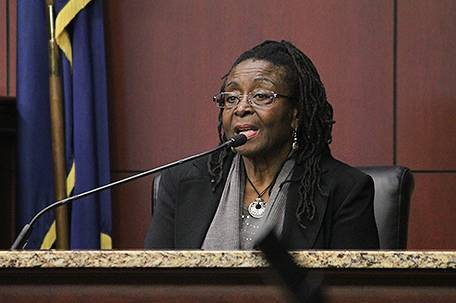 ABOVE PHOTO: Katherine Stinney Robinson, 79, sister of George Stinney, testifies during the hearing Tuesday, Jan. 21, 2014, at the Sumter (S.C.) County Judicial Center in Sumter, S.C. George Stinney, a 14-year-old black boy executed nearly 70 years ago is finally getting another day in court, as his lawyers argue for a new trial, saying his conviction was tainted by the segregationist-era justice system and scant evidence. Stinney was found guilty in 1944 of killing two white girls, ages 7 and 11. The trial lasted less than a day in the tiny Southern mill town of Alcolu, separated, as most were in those days, by race.

SUMTER, S.C.  — The judge, prosecutor and defense lawyers all agree that justice, at least by today’s standards, wasn’t carried out 70 years ago when a 14-year-old black boy was sent to the electric chair for killing two white girls.

But figuring out exactly what happened in March 1944 may be elusive, they said during the first day of a hearing into whether the boy, George Stinney, should get a new trial. People who attended the original trial have died and most of the evidence, including a transcript of the trial, has disappeared.

Stinney was found guilty of killing 11-year-old Betty Binnicker and 7-year-old Mary Emma Thames just over a month after their bodies were found beaten in the head and left in a water-filled ditch. The trial lasted less than a day in the tiny Southern mill town of Alcolu, separated, as most were in those days, by race. His lawyers argued his conviction was tainted by racism and scant evidence.

Nearly all the evidence, including Stinney’s confession, has vanished. Lawyers working on behalf of Stinney’s family have gathered new evidence, including sworn statements from his relatives accounting for his whereabouts the day the girls were killed and from a pathologist disputing the autopsy findings.

But that evidence depends mostly on the unreliability of the human memory. Stinney’s younger sister, who was 7 at the time, testified Tuesday about how she hid in a chicken coop when several white men in uniforms arrived at their home in strange-looking cars. She vividly remembered seeing her brother’s burned body in a casket after his electrocution and the unmarked grave he was buried in. But on cross examination, Amie Ruffner struggled to remember details of a 2009 sworn statement she gave.

PHOTO: This mug shot of George Stinney who wasa executed in Columbia, S.C., in June 1944. Stinney is one of the youngest defendants executed in American history and the youngest executed in the 20th century. His family has always challenged his conviction, which took an all-white jury only 10 minutes to decide in the summer of 1944.

“If you can’t remember what you wrote down in 2009, why should we believe that you can believe something that happened in 1944?” prosecutor Ernest “Chip” Finney III said.

Circuit Judge Carmen Mullen said her task isn’t deciding whether Stinney is guilty or innocent, but whether he got a fair trial at the time.

“What can I do? What can I rectify?” Mullen said at the beginning of the hearing. “And even if we did retry, Mr. Stinney, what would be the result? Again, none of us have the power to bring that 14-year-old child back.”

If Mullen finds in favor of Stinney, it could open the door for hundreds of other appeals.

But the Stinney case is unique. At 14, he’s the youngest person executed in the United States in the past 100 years. Even in 1944, there was an outcry over putting someone so young in the electric chair. Newspaper accounts said the straps in the chair didn’t fit around his 95-pound body and an electrode was too big for his leg.

Mullen acknowledged how the case was unusual.

“No one here can justify a 14-year-old child being charged, tried, convicted and executed in some 80 days,” she said.

In 1944, Stinney was likely the only black in the courtroom. On Tuesday, the courtroom was packed with African-American supporters and the prosecutor arguing against him is the son of South Carolina’s first black chief justice. Finney argued there shouldn’t be a new trial because the evidence was lost with the passage of time. He said he is shocked and dismayed that the justice system took such little regard for a boy’s life, but that was the way justice operated at that time.

South Carolina executed 59 people in the 1940s. Fifty of them were black, according to the Death Penalty Information Center. The state’s black population was 43 percent back then. It is about 28 percent today.

Newspaper stories about Stinney’s trial offer little clue whether any evidence was introduced beyond the teen’s confession and an autopsy report. Some people around Alcolu said bloody clothes were taken from Stinney’s home, but never introduced at trial because of his confession. No record of those clothes exists and Stinney’s sisters and brothers all said they never saw him with bloody pants or a shirt.

Relatives of the girls have recently spoke out as well, saying Stinney was known around town as a bully who threatened to fight or kill people who came too close to the grass where he grazed the family cow.

Terri Evans, a cousin of Thames born years after she died, said it’s a shame this hearing couldn’t be held earlier. Her uncle was at the 1944 trial and watched Stinney’s execution. He told her he was convinced of the teen’s guilt and felt terrible for his family, too.

“These people who were kids at the time, all they knew then was fear. There’s no one living that was at the trial,” Evans said. “Everything anyone says now is hearsay.”

The hearing will continue Wednesday. It isn’t clear when the judge will rule.

Jurors to visit scene of police shooting as trial begins