President Obama to get most of $6.2B request to fight Ebola 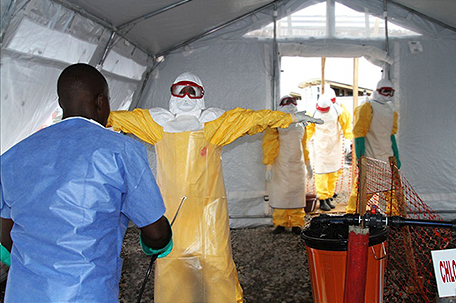 WASHINGTON — President Barack Obama will be awarded the bulk of his $6.2 billion request to fight Ebola in Africa, a senior member of the Senate Appropriations Committee said Thursday.

Sen. Lindsey Graham, R-S.C., said Thursday that Obama won’t get the full $1.5 billion he requested for a contingency fund but he’s getting the green light for other portions of the request.

Graham is the lead Senate GOP negotiator on the foreign aid budget as lawmakers wrap up talks on a $1 trillion-plus omnibus spending bill in advance of a likely vote next week.

That money would be used to strengthen the public health system in the U.S., combat the epidemic in West Africa and speed up the development of vaccines and other therapies. The money also would be used to help vulnerable foreign countries detect and respond to the disease.

The administration would establish more than 50 Ebola treatment centers throughout the U.S., buy safety suits and more strictly monitor travelers upon their arrival in the country.

Obama also wanted $1.5 billion for a contingency fund to deal with any unanticipated developments such as a new flare-up in West Africa or a need to vaccinate U.S. health care workers.

Graham said he wanted to make sure that the contingency fund doesn’t amount to a “slush fund” but Obama’s other requests were “in the ballpark.”

A Senate aide, speaking on condition of anonymity because negotiations are being conducted in secret, said Obama will probably win more than $5 billion of the request.

The omnibus spending bill would cover the approximately one-third of the budget dedicated to day-to-day operations of Cabinet agencies. Programs such as Social Security, Medicare and the new health care law are separately paid for in the “mandatory” portion of the federal budget.