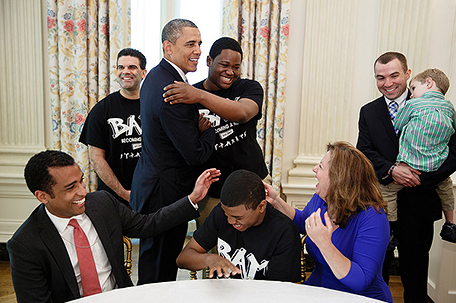 Making good on a promise he made during the State of Union Address, President Barack Obama has been working with young black men.

“Nightmares,” the Hyde Park Academy senior said Thursday. “I dreamed that I wasn’t going to graduate.”

Last year, Corey didn’t have much of a chance to earn his diploma with his classmates. He got so behind in his school work that catching up seemed like long shot — almost not worth the effort.

But a chat with President Barack Obama inspired him to give it a shot.

Before making a speech in the school gym in February, President Obama talked with Corey and other members of the mentoring program Becoming A Man — that’s BAM for short — about the importance of picking a goal and fighting to accomplish it.

Corey told the president about his goals to do better in school and, frankly, reduce the size of his belly.

“He inspired me to change a lot about myself,” Corey said. “I was on the verge of not graduating. … He also made a comment about me having a weight-loss plan for myself.”

On Thursday, Corey came to school scared that after all his hard work he still might fall short.

“I prayed to God right before my grades were finalized,” Corey said.

While Corey worried in class, about a dozen of his buddies in BAM excitedly awaited what the day would bring — a secret field trip to the White House where they’d reunite with President Obama for a special Father’s Day lunch Friday in the state dining room.

“The first time he came here it was an honor. Now, I’m flabbergasted by the second time that we actually get to go to the White House and actually sit down, talk with the president,” said Robert Scates, who graduates on Monday and plans to attend Columbia College in the fall. “I’m very joyous about it.”

Hyde Park Academy boys in the mentoring program Becoming A Man — BAM for short — headed to the White House to have lunch with President Barack Obama on Friday, June 14, 2013.

“It is good to see all of you here, so many young people,” Obama said. “Obviously, this is a great way for us to celebrate Father’s Day and just remind ourselves, those of who are fathers, how lucky we are.”

But Ramirez-DiVittorio said the trip is more than an amazing adventure for the boys — many of whom have never flown on an airplane before. The White House invite proves to the guys that there are strong, successful men — even the leader of the free world — who want to help them succeed.

During Obama’s February visit to the Academy, 6220 S. Stoney Island Ave., he participated in BAM’s support circle — a time when the boys “check in” on how they’re doing physically, intellectually, emotionally and spiritually, DiVittorio said.

“When the president came in February he checked in with us on those four areas. … Now the president is checking in again with us,” Ramirez-DiVittorio says. “I’m looking forward to hearing what he has to say. I know the boys are.”

No one’s more excited than Corey.

On Thursday, he finished up his last online exams and hoped against hope that he wouldn’t have to tell President Obama that summer school was in his future.

A few hours before the bus was set to leave for the airport, Corey’s prayers were answered.

“I got that little orange card that said I’m graduating,’” he said. “I ran to the auditorium to get my cap and gown. So excited.”

He can’t wait to get a moment with president.

“I’m gonna tell him that I accomplished my biggest goal in my life right now, to graduate high school,” he said. “I followed up on what he said. … Chase your goals and you’ll be able to accomplish them.”

As for Corey’s belly, well, that’s still a work in progress.

“I’ve been working on it,” he said, rubbing his gut. “I can’t say I’ve made too much progress as you can see.”

Hopefully, the president won’t bring that up before dessert.