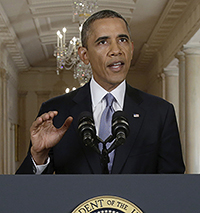 FILE – In this Sept. 10, 2013 pool-file photo, President Barack Obama addresses the nation in a live televised speech from the East Room of the White House in Washington. “We’ve kind of hit a wall,” President Barack Obama said on his way to Russia last week. He meant his relationship with Moscow, but the remark came to apply, too, to other leaders abroad, lawmakers at home and even Americans at large, all standing in the way of his plans to punish Syria for using chemical weapons. Just days later, military action is on hold, diplomacy has some steam and Obama no longer looks so alone. (AP Photo/Evan Vucci, Pool-File)