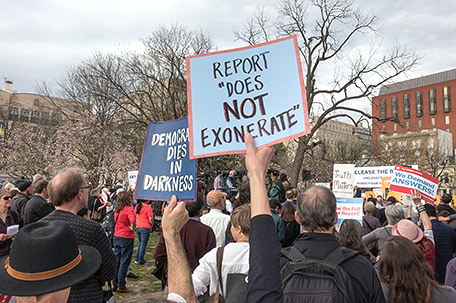 America and the administration of President Donald Trump continue to reel from the fallout caused by the release of the redacted report of special counsel Robert Mueller.

The 448-page document, produced after a 22-month investigation into alleged ethical and possibly criminal and illegal behavior by Trump, members of his transition team and others in his administration, have found that Trump likely engaged in obstruction of justice, subverted democratic institutions and processes and welcomed the assistance of Russia to help them win a deeply divided election in 2016.

Before the two-volume report was released by the Justice Department, Trump insisted via Twitter, traditional media and elsewhere that there was no collusion, no obstruction, adding that he expected to be totally exonerated. The report, while saying that none of Trump’s behavior rose to the level of criminal conspiracy, the report “does not conclude that the President committed a crime (and) also does not exonerate him.”

A recent USA Today column by the paper’s editorial board says if Donald Trump didn’t collude with Russians during the 2016 presidential campaign or obstruct the special counsel’s investigation that followed, it wasn’t for a lack of trying. And on the collusion question, Mueller’s report offers chapter and verse on Russia’s “sweeping and systematic” efforts to interfere with the campaign — and Team Trump’s amateurish, right-up-to-the-edge dalliances with Russian operatives.”

Grassroots Black voters across the country have joined the experts in opining on the report.

“I think bulls**t about all this, because all Mueller did is tell us what we already knew,” said Annette Muse, a DC-based non-profit consultant. “He’s honestly dishonest and we didn’t need a report to tell us that. Trump has been nothing but transparent. They have written books about it. I don’t blame Trump though, I blame the American people.”

Muse said Trump’s blatant disregard for the law, his attack on the norms and customs of his office, the unrelenting attacks on the courts, the media and journalism and his profligate lying has not only eroded these institutions but also people’s confidence in government, the presidency and Congress.

“The problem is, he’s turned the country and the world into a reality show,” she said. “As the Panama Papers and the corruption exposed at Deutsche Bank show, the system is corrupt and he has taken advantage of it. His impulse is to take advantage of a corrupt system. Instead of dancing around that, we need to address that.”

Some wonder that if Mueller found no definitive evidence of a conspiracy, why did Trump and those around him work so hard to discredit the investigation, and why did he fire former FBI Director Jim Comey, then-Attorney General Jeff Sessions and force out people like the FBI’s Andrew McCabe and others?

For those opposed to Trump and his presidency and the many who pinned their hopes on the Mueller investigation producing damning evidence of malfeasance by Trump and unmistakable proof of high crimes and misdemeanors, the report is a disappointment, in part, because although Mueller found significant evidence of Trump’s corrupt intent, he did not offer a judgment on whether Trump obstructed justice as he labored to impede the investigation.

Mueller stated, “the president’s actions and intent presents difficult issues that prevent us from conclusively determining that no criminal conduct occurred.”

Mueller may have been limited in his ability to prove criminal behavior, but he left Congress what Rep. Elijah Cummings calls, “a roadmap to follow.”

There is increasing talk of impeachment, sprinkled with caution or outright dismissal by House Speaker Nancy Pelosi and House Majority Leader Steny Hoyer. But Cummings, chair of the House Reform and Oversight Committee, earned widespread praise when he said: “Even if we did not win, possibly, if there were not impeachment, I think history would smile upon us for standing up for the Constitution.”

Trump’s victory laps may be premature. The cloud of the damning indictment will hang over him until the end of his presidency and he could well face state charges after leaving office.

Alton Drew, a lawyer and consultant on economics, Broadband and related communications issues, said he’s bemused by the whole affair.

“I’m enjoying people losing their minds,” he chuckled. “I wasn’t expecting much. I went through the first half [of] the first part of the report and so far and there are no surprises. To me, the real takeaway is how easy it was to manipulate 130 million people. The Russians used the openness of the country and social media. In two years they did all this damage? I was like ‘whoa!!’ I should be taking notes.”

From a legal standpoint, Drew said, Trump probably did nothing wrong and he also would have had to have made statements that were materially untrue to get into legal trouble.

“He wasn’t put in a witness chair and the problem is that you can’t charge a sitting president,” he said, although some legal experts dispute that claim. “There is a lot of reasonable doubt, too much to charge this man. I need to see evidence of corruption. I don’t think there will be an impeachment and Mueller and the Democrats didn’t deliver what was promised.”

Even though the rule is, ‘if you can smell it, it probably happened,” Drew cautioned that “It’s gonna be tough to prove obstruction.”

Yet the writer and blogger said there are troubling actions Trump took that leave him exposed and open to criticism and investigation.

“He should have put his businesses in a blind trust but he thinks he’s above the law and optics. He’s a businessman and this is an influence game,” Drew said. “He’s not politician and he’s so arrogant that he felt that he didn’t have to do this. He’s an ignorant, arrogant blowhard. The Russians were intent on making sure Hillary Clinton didn’t win and just happened to find an inexperienced man who gave them a high-result return.”

“The US spends $80 billion a year on intelligence and spy agencies and we didn’t do anything. No one brought up Russian interference in 2014, 2015 or 2016. What’s amazing is that the Russians almost brought down the country on a shoestring budget.”

Skipper Bailey said all he’s seen, read and heard makes it clear that with Trump’s lies, corruption, ethical misconduct and his embrace of Russian attempts to, interfere in and influence, the outcomes of America’s 2016 election, there is grounds for impeachment.

Though President Trump claims he could only be impeached for “high crimes and misdemeanors, a sitting president actually does not have to commit a crime in order to be impeached. A president can be impreached for anything that the House and Senate deem worthy of impeachment – such as obstruction of justice. An impeachment must be established by simple majority of the U. S. House of Representatives and by two-thirds of the U. S. Senate.

Going into the 2020 presidential elections, Bailey, a business man and DC resident, said his biggest concern is the vulnerability of America’s electoral system. Just this week, Senate Republicans voted down almost $400 million slated for election security, the latest of several such votes.

Bailey asked, “The question is, are you going to get an accurate count, will the results be free and fair?”