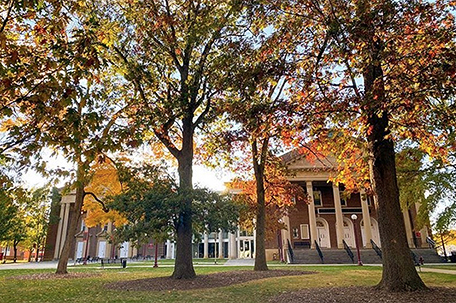 ABOVE PHOTO: The Oak Grove at Indiana University of Pennsylvania (Photo/@iupedu)

HARRISBURG, Pa. (AP) — More than 80 tenured and tenure-track faculty members at a western Pennsylvania university have been told they may lose their jobs at the end of the 2020-21 academic year, part of more than 100 possible job cuts at five universities in the commonwealth, union officials said.

Faculty union officials said retrenchment letters, or furlough letters, were sent to 81 faculty members at Indiana University of Pennsylvania and 21 at Edinboro University. Also receiving letters were six members at Cheyney University, three at Mansfield University and two at Lock Haven University. California and Clarion universities had earlier warned of possible retrenchments but none of their professors were notified by Friday’s deadline.

Although Indiana University of Pennsylvania had previously announced possible job cuts, David Chambers, a political science professor who is vice president of the faculty union’s IUP chapter, told the Tribune-Review that officials were “still kind of absorbing the shock” of members receiving actual notices.

The reductions, combined with retirements and nonrenewal of temporary contracts, would mean job losses totaling about 128 fulltime posts and elimination of the entire faculties of several departments, including journalism and public relations, information systems and decision sciences and developmental studies, Chambers said.

The Association of Pennsylvania State College and University Faculties, which represents faculty at the 14 universities in Pennsylvania’s State System of Higher Education, said such a letter doesn’t mean definite loss of a position, and members are eligible to move to other departments or system universities. But Dr. Jamie Martin, union president, said openings are less likely this year.

“Not only are faculty cuts a blow to the professors themselves, but, by extension, layoffs take opportunities away from students,” Martin said. “Retrenchment is devastating at any time, but these letters are threatening to take away livelihoods and healthcare in the middle of a global pandemic.”

State System spokesman David Pidgeon said officials “have been challenging the status quo and will continue to do so as we look to reshape public higher education in Pennsylvania and recapture our affordability edge in a competitive marketplace.”

Indiana University of Pennsylvania last week announced closure of enrollment in five college of fine arts programs as the school tries to cope with a 33% enrollment decline over the last decade. Edinboro, where enrollment has plummeted by 50 percent since 2010, announced plans to eliminate 21 academic programs with low enrollment.