Poll: Young Americans fear they will be worse off post-Trump 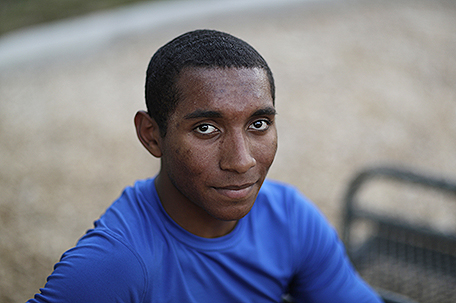 ABOVE PHOTO:  Brien Tillett sits a park in North Las Vegas on July 12, 2016. Now 18, he was 10 when the recession hit and sucked the wind out of his family. In the 2016 election, the national debt is his No. 1 concern. As a black man, he’s turned off by some of Donald Trump’s remarks, but likes the Republican’s aggressive economic stance. He’s considered voting for Hillary Clinton, but is angry about her use of a private email server while Secretary of State. Undecided at first, he recently decided on Clinton. (AP Photo/John Locher)

By Jonathan Lemire and Emily Swanson

NEW YORK — As Donald Trump approached his inauguration, young Americans have a deeply pessimistic view about his incoming administration, with young Blacks, Latinos and Asian Americans particularly concerned about what’s to come in the next four years.

That’s according to a new GenForward poll of Americans aged 18 to 30, which found that the country’s young adults are more likely to expect they’ll be worse off at the end of Trump’s first term than better off. Such young Americans are also far more likely to think Trump will divide the country than unite it, by a 60 percent to 19 percent margin.

Fifty-two percent of young Whites, 72 percent of Latinos, 66 percent of Asian-Americans and 70 percent of Blacks think Trump’s presidency will lead to a more divided nation.

“Minority people are very afraid of all the rhetoric that he ran upon (in) his campaign,” said Jada Selma, a 28-year-old African-American graduate school student living in Atlanta. “Anytime he mentioned Black people, he would talk about poor people or inner city. He would think that all of us live in the inner city and that we’re all poor.”

“If you’re not a straight White male, than I don’t think he’s looking out for you as an American,” she said.

GenForward is a survey of adults age 18 to 30 by the Black Youth Project at the University of Chicago with the Associated Press-NORC Center for Public Affairs Research. The first-of-its-kind poll pays special attention to the voices of young adults of color, highlighting how race and ethnicity shape the opinions of a new generation.

The poll found that 54 percent of young people overall say life for people of color will be worse with Trump as president. About two-thirds of young Blacks, Asian-Americans and Latinos think things will get worse for people of color, and Whites are also more likely to expect things to get worse than better for minorities, 46 percent to 21 percent.

Kuinta Hayle, a 21-year-old African-American from Charlotte, said she is worried that Trump’s selection for attorney general, Alabama Sen. Jeff Sessions, could roll back civil rights. She said Trump’s foray into “birtherism,” during which he propagated the lie that President Barack Obama was not born in the United States, still bothered her.

“That was very meaningful. It still hurts,” Hayle said. “He doesn’t know anything about my life or the lives of people who aren’t like him. I feel Donald Trump is only for rich people. Obama was for people who didn’t have much.”

Although he had a decisive win in the Electoral College, Trump lost the overall popular vote to opponent Hillary Clinton and has done little to reach out to those who didn’t support him in November’s election. He focused his post-election “Thank You” tour on states he won, settling scores on stage as he boasted about his surprising electoral victory.

Last weekend, Trump tore into Georgia Rep. John Lewis, among the most revered leaders of the civil rights movement, for questioning the legitimacy of his victory and saying he would not attend Friday’s inauguration.

As for Obama’s presidency, young Americans are split on whether he has done more to unite or divide Americans, 38 percent to 35 percent, with 26 percent saying it did neither.

Indeed, not all young Americans are pessimistic about the incoming president.

“He’ll be good for the economy. He’s a businessman and he’ll bring more jobs back,” said Francisco Barrera, 26, of Ft. Wayne, Indiana, who voted for Trump. “I think he’s going to do good and he’s going to end this political correctness. You can’t even say ‘God’ in the schools no more. Trump will put him back.”

A majority of young adults think Trump will go down in history as not a very good president or a poor one. Young people of color are particularly likely to think Trump’s presidency will be not good or poor, but even young Whites are more likely to expect that than to think it will be good or great, 48 percent to 27 percent.

Young Americans are divided as to whether Trump will accomplish his campaign promises. While most think he’ll probably cut taxes for the rich and more than half of young people (59 percent) think Trump will deport millions of immigrants living in the country illegally, just 39 percent expect that he will be successful in building a wall along the Mexican border.

However, about half of young Hispanics think that Trump is likely to build a border wall. And more than 7 in 10 young people believe he will definitely or probably succeed at repealing the Affordable Care Act.

“He’s not even been inaugurated yet and he’s already alienating people,” said Greg Davis, a White 28-year-old graduate student living in Columbus, Ohio. “He’s still parroting the alt-right’s messages. His policy ideas I think would be awful. His nominees for Cabinet positions are disastrous. He’s nominating people who have the exactly the wrong ideas.”

“I think it’s going to be a disaster,” Davis said.

The poll of 1,823 adults age 18-30 was conducted Dec. 9-12, 2016 using a sample drawn from the probability-based GenForward panel, which is designed to be representative of the U.S. young adult population. The margin of sampling error for all respondents is plus or minus 4 percentage points.

The survey was paid for by the Black Youth Project at the University of Chicago, using grants from the John D. and Catherine T. MacArthur Foundation and the Ford Foundation.