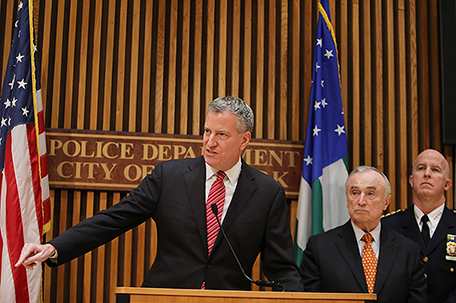 NEW YORK–Mayor Bill de Blasio’s approval rating has held steady during the biggest crisis of his young mayoralty, according to a new poll released Friday.

A searing rift with the rank-and-file police in the wake of the shooting death of two NYPD officers rattled City Hall, dominated the headlines and threatened de Blasio’s ability to achieve his ambitious agenda.

The new Quinnipiac University poll shows that 49 percent of voters approve of the job de Blasio is doing as mayor while 40 percent do not. On Dec. 18, two days before the officers were killed as they sat in their patrol car on a Brooklyn street, de Blasio’s approval rating was 47 percent.

Police union leaders blamed de Blasio for creating an anti-NYPD atmosphere that they felt fueled the shooting and, in a blatant form of disrespect, turned their backs to him several times, including at both officers’ funerals.

But a separate Quinnipiac poll released Thursday indicated that most New Yorkers disapproved of the unions’ behavior, including rank-and-file police leader Patrick Lynch’s assertion that de Blasio had “blood on his hands’’ from the murders.

The poll, which was conducted Jan. 7-14, has a margin of error of 2.9 percentage points, larger for subgroups. It is the first poll released since the officers were killed.

Among its other findings:

•  Gov. Andrew Cuomo, who started his second term in office this month, has a 71 percent approval rating in New York City.

•  Forty-eight percent of those surveyed approve of how de Blasio is managing the city’s public school system.

Tweet Share Pin Email BPT At a time when you may be craving comfort food more than...

How to stop wasting perfectly good water down the drain

SUNscopes for the week of June 28