Police: Suspect in imam’s slaying had gun stashed in wall 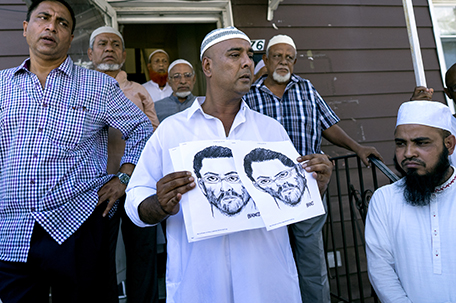 ABOVE PHOTO:  At the front entrance of the Al-Furqan Jame Masjid mosque in the Ozone Park section of Queens, New York, a police sketch of a suspect believed to have shot the mosque’s Imam is displayed by members of the mosque Sunday, Aug. 14, 2016, a day after 55-year-old Imam Maulama Akonjee and his 64-year-old associate, Thara Uddin, were shot in the back of the head after they left the mosque following afternoon prayers Saturday.  (AP Photo/Craig Ruttle)

By Ezra Kaplan and Tom Hays

NEW YORK — A handgun was found stashed in the wall of the basement apartment of the man suspected of gunning down an imam and his friend as they left evening prayer at a mosque, New York City police said Tuesday.

New York Police Department investigators were testing the .38-caliber revolver to see if it matches forensic evidence from the ambush slayings of Imam Maulana Alauddin Akonjee and Thara Uddin near the Al-Furqan Jame Masjid mosque in the Ozone Park neighborhood of Queens.

Oscar Morel, a 35-year-old porter at a Manhattan college, was awaiting a court appearance on murder charges as authorities sought to determine a motive.

In a statement, Queens District Attorney Richard Brown said the killings were being viewed as a possible hate crime.

Morel “is accused of the murder of a highly respected and beloved religious leader and his friend as they walked home from an afternoon prayer service,” said Brown, who met with family members of the victims on Tuesday. “Their deaths are a devastating loss to their families and the community that they served as men of peace.”

It was not immediately clear if Morel had an attorney who could comment on the charges.

The killings have stoked fear and anger in the largely Bangladeshi Muslim community in Queens and Brooklyn, where residents have described harassment in recent months by people who shouted anti-Muslim epithets.

Mohammed Nuruzzaman, 31, said the community was anxious to know more about why the men were targeted.

“Why he did it — that’s the very important thing. What is the motive?” he said. “Did he really do it or is somebody behind it? That’s the kind of thing we want to know.”

Police said officers searching the Brooklyn home where Morel was arrested late Sunday found the suspected murder weapon — as well as clothes they believe he was wearing at the time of the shooting — behind a section of the wall that had been cut out and reinstalled with screws.

Amado Batista, a maintenance worker at Morel’s building, said Morel worked night shifts and had lived in the apartment for eight months. Batista said Morel kept to himself.

The New School confirmed that Morel had worked there since November 2013 and that the college was cooperating with the investigation, but declined further comment.

Police believe Morel was waiting on the block near the mosque for several minutes on Saturday before he shot each victim in the back of the head, then fled in a black GMC Trailblazer. They later learned that a car matching that description struck a bicyclist nearby only 10 minutes after shooting.

After finding vehicle parked on the street, police waited for Morel to return. He was captured after getting into the car and ramming a police car while trying to flee.