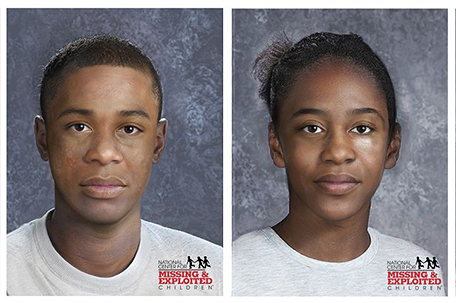 ABOVE PHOTO:  These undated photo Illustrations provided by the National Center for Missing & Exploited Children show artist conceptions of what Ivon Fowler, left, and Inisha Fowler, right, may look like currently. The two twin children of Patricia Fowler have not been seen for over ten years. The mother, who has been free on bail on charges of concealing the whereabouts of the twins, has claimed the children are safe and living out of state, but no information she provided has panned out.   (Colin McNally/National Center for Missing & Exploited Children via AP)

PITTSBURGH — Two weeks after child welfare workers removed four children from a woman’s suburban Pittsburgh home in June for alleged neglect, they discovered an even bigger problem: The woman has two other children who are missing, and haven’t been seen alive for more than a decade.

Since the summer, police investigators have cast a wide net for twins Ivon and Inisha, who would be about 18 now. A county detective has testified he believes the children are dead but can’t prove it. A cadaver-sniffing dog came up empty during a search of another Pittsburgh area house in December.

Patricia Fowler was arrested in August on charges of concealing the whereabouts of her twins after police investigated following the removal of four of her other children. Fowler has claimed the children are safe and living out of state, but no information she’s provided to police has panned out, authorities said. She’s been free on bail.

As police try to solve the mystery, they have filed additional charges against Fowler, 47, accusing her of illegally collecting more than $50,000 in state food stamps, public assistance and medical benefits for the twins. As of Friday, she had not yet surrendered on the new counts, which include theft.

A criminal complaint filed Wednesday said she had been collecting benefits for the twins since June 2011, and continued doing so through the end of August – weeks after police charged her with concealing the twins’ whereabouts. Her public defender would not comment, citing an office policy to not commenting on pending investigations.

Fowler has changed her story several times regarding the whereabouts of Ivon and Inisha. She’s told police the two children are living with friends or relatives in North Carolina, South Carolina and Georgia, only to have the names and addresses she’s provided not check out, or have relatives tell police they’ve never heard of the twins. Police said one out-of-state address provided by Fowler turned out to be a vacant storefront, and one Georgia city she named didn’t exist.

At one point, Fowler even told police she sold the children years ago for $2,000 each to a woman she didn’t know in a deal brokered by a man she met in a bar. She reversed course and told police that was a lie.

Police have unsuccessfully checked with the National Center of Missing and Exploited Children, which in September released age-progressed images showing what the twins may look like now. Other databases in various states provide no evidence that the twins ever attended school.

The detective said this week he can’t comment on the ongoing investigation.

Fowler’s son, Datwon, 19, remains jailed on charges he conspired with his mother to hide his twin siblings from authorities.

Datwon texted police at his mother’s behest back in August, pretending to be Ivon and saying that he and Inisha were safe and sound and living out of state, police said. But GPS tracked the phone to the home Datwon shares with his mother, and he confessed to the ruse.

Datwon’s attorney, Richard McCague, said he believes the new charges are an effort to put Fowler behind bars like her son.

“They don’t have a complaint about child abuse and they don’t have a body indicating someone has died. They believe these children are dead but they can’t prove it,” McCague said. “Under those circumstances, what else can they charge mom with?”

A Centerfielder is coming! Phillies acquire Ben Revere from the Twins for Vance Worley and Trevor May