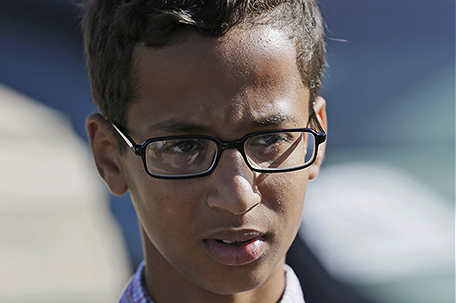 ABOVE PHOTO:  Ahmed Mohamed, 14, listens to a question outside his family’s home in Irving, Texas, Thursday, Sept. 17, 2015. Mohamed was arrested at his school after a teacher thought a homemade clock he built was a bomb.  (AP Photo/LM Otero)

DALLAS — Police in suburban Dallas will review their response to a 14-year-old Muslim boy who brought a homemade clock to school that was mistaken for a possible bomb, according to the police chief overseeing the matter.

Irving Police Chief Larry Boyd on Friday said his department will examine its handling of the scare at MacArthur High School but that officers were justified Monday in questioning and handcuffing Ahmed Mohamed, given the limited amount of information they had.

The teen has said he brought the clock to school to show a teacher. Officials say Ahmed was arrested after another teacher saw the clock and grew concerned.

The device featured a circuit board, power supply and other items within a carrying case.

Police ultimately chose not to charge Ahmed with having a hoax bomb. He was suspended from school.

“I had significant feedback on this, some of which you wouldn’t be able to print,” Boyd said. “It’s clear to me that no matter what we did, there would be those who agreed with it and those who wouldn’t.”

A petition organized by the group Progress Texas was submitted Friday to the Irving school district asking for the reversal of Ahmed’s suspension and an apology.

The boy’s family says he will enroll at another school.

One of the largest Muslim groups in Texas has said it does not fault the way police and school officials handled the matter.

Instead, Khalid Hamideh of the Islamic Association of North Texas last week blamed political leaders for espousing inflammatory anti-Muslim rhetoric and creating a “climate of fear.”

News of the arrest sparked an outpouring of support for Ahmed, including from President Barack Obama.