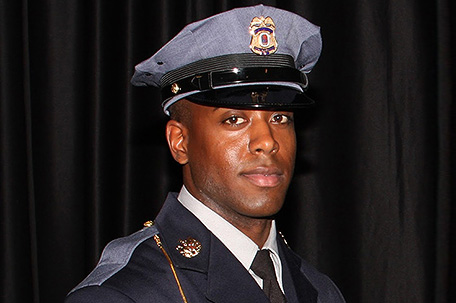 UPPER MARLBORO, Md. — The plainclothes police officer who died in a chaotic shootout at a Maryland police station was deliberately shot by a fellow officer who did not recognize him and viewed him as an armed threat, a police chief said Wednesday.

Speaking to reporters outside the Prince George’s County courthouse, Police Chief Hank Stawinski was careful not to speculate about the state of mind of the unidentified officer who fired upon Officer Jacai Colson on Sunday afternoon outside a police station in Landover, but he said it was clear that the officer feared for his life.

“I don’t believe for a second that our officer intentionally fired at another police officer,” Stawinski said.

Three brothers who live near the suburban Washington police station have been charged in the gunfight, which police have described as an attempt by the suicidal oldest brother, 22-year-old Michael Ford, to provoke officers into killing him. According to police, Ford was driven to the station by his two younger brothers and began firing at the building and at passing vehicles, causing officers to return fire. Ford fired more than 20 shots, prosecutors said in court Wednesday.

Police said Ford’s brothers aided him before and during the shootout and used their cellphones to record video of the gunfight. They also recorded video of Michael Ford offering a “last will and testament,” police said.

A judge denied bail on Wednesday afternoon for Ford’s brothers, 21-year-old Malik Ford and 18-year-old Elijah Ford, in a dramatic hearing that included emotional pleas on their behalf by their father and several other relatives. While listening to his relatives, Malik Ford, who appeared in court via closed-circuit television, collapsed and fell to the floor. Some of his family members wept as he was treated by medical personnel, and the hearing resumed a few minutes later, with Ford seated in a chair.

The relatives tried to distance Malik and Elijah from Michael’s actions, saying they were not armed and their involvement was minimal.

“He didn’t pull the trigger,” their father, Michael Thomas, said of Elijah. “My son is excellent. He’s a great person.”

After bail was denied for Elijah Ford, his sister, Ebony Howard, blurted out to Judge Robert Heffron, “Do you all have any incriminating evidence against him?”

Heffron informed her that it was the state that gathers evidence against defendants.

Thomas said his sons had strong character and mostly stayed out of trouble. Elijah, a high school senior, has no criminal history, while Malik has been charged twice with petty theft. The charges were dropped in both cases, court records show.

Another relative, who did not identify herself in court, said “Elijah was not seeking YouTube celebrity,” arguing instead that he recorded video of the shooting because he was concerned no one would believe what had happened.

Colson, a 28-year-old narcotics detective, was wearing street clothes and responded to the shooting from a different location than the other officers, according to charging documents. Colson was black. Police have not revealed the race of the other officers involved in the shootout. State’s Attorney Angela Alsobrooks said her office would investigate every aspect of the shooting, including whether race was a factor.

Michael Ford faces more than two dozen charges, including second-degree murder. Malik and Elijah face charges including attempted murder and conspiracy to commit murder. Alsobrooks has said the brothers, who were not armed, could also be charged under Maryland’s felony murder law, which applies to people who participate in a felony that results in a homicide.