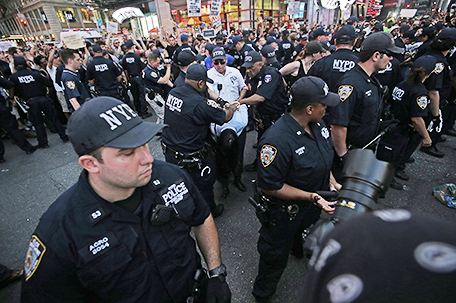 Deadly force occurs in less than 1 percent of the millions of encounters police have with people each year. A look at the laws and policies governing when police can use deadly force:

WHEN IS FORCE JUSTIFIED?

There are two defining cases. In Tennessee v. Garner in 1985, the U.S. Supreme Court ruled that an officer cannot use deadly force against a fleeing suspect unless the suspect is a significant threat to the officer or to others.

Four years later, the Supreme Court ruled in Graham v. Connor that officers who use force must be judged on the totality of circumstances and a standard of “objective reasonableness.”

Force “must be judged from the perspective of a reasonable officer on the scene, rather than with the 20/20 vision of hindsight,” the court said.

WHAT HAPPENED IN THE GRAHAM CASE?

Dethorne Graham was a diabetic who was experiencing a blood-sugar episode. He asked a friend to drop him off at a store so he could get orange juice.

When Graham saw the long line, he left behind the juice, ran out of the store and rode away in a car.

An officer saw Graham leave, became suspicious and pulled him over to investigate. Backup officers arrived and handcuffed Graham, ignoring his pleas that he was having a diabetic reaction. During the encounter, he suffered multiple injuries.

He was released after the initial officer determined nothing illegal had happened.

HOW MUCH FORCE IS TOO MUCH?

Force should be limited to what is needed to make a suspect comply with police instructions, said Darrel Stephens, the Major Cities Chiefs of Police Association’s executive director.

“After you gain compliance, it’s inappropriate for you to continue to use force. That’s where, at times, police officers get carried away and go beyond,” he said. “They kick or punch somebody just because of their anger.”

DOES A GUN JUSTIFY FORCE?

Not necessarily. A gun on a suspect may heighten the officer’s alert for signs the person is reaching for the firearm. Responding to a threat often involves immediate decisions. But the justification for using force depends on the complete circumstances of the situation and the Graham decision’s reasonableness standard.

“The presence of a firearm dramatically changes the use-of-force decision-making,” said Chuck Wexler, the Police Executive Research Forum’s executive director. For police, he said knowledge of a gun on a suspect takes the situation “from zero to 60 in a split second.”

HOW DO POLICE AVOID USING FORCE?

Officers are often trained to think they must act fast, he said. But Bostain said they should be finding ways to slow things down and consider alternatives.

Better decision-making would lead to fewer situations “often referred to as ‘lawful but awful,’” he said.