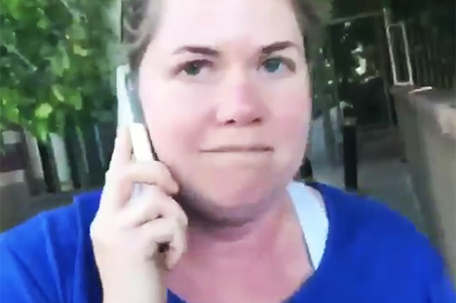 A video showing a woman allegedly in the middle of calling the police on an 8-year-old girl for selling water on the street without a permit in San Francisco made its rounds on the internet Saturday morning.

NBC News reported that Alison Ettel, dubbed “Permit Patty” on social media, was attacked online after video of her trying to hide while she was on the phone gained more than 1 million views after it was posted Saturday on Instagram.  Erin Austin, the mother of the 8-year-old girl, Jordan Rodgers, said her daughter was selling bottles of water in front of their home in an attempt to raise money because Austin recently lost her job. Jordan also wanted to get enough to pay for a trip to Disneyland.

Rodgers’ unpermitted sales took place right outside of her apartment building, according to Austin, who posted a video to Instagram that quickly went viral.

“Would you rather my daughter be out here getting into [expletive] [because] an 8-year-old selling water in front of her apartment building where she’s lived her whole life is NOT a reason to call the police,” the mother wrote in a caption to the video, and went on to dub the woman “Permit Patty.”

In the video, Austin can be heard confronting the woman, who is alleged to have reported the girl to authorities.  Police did not respond to requests for comment by press time.

“This woman don’t wanna let a little girl sell some water,” said the mother, as she as she followed the woman who can be seen attempting to hide from view. “She’s calling police on an 8-year-old little girl — you can hide all you want.”

Holding her cellphone to her ear, Ettel replied, “And illegally selling water without a permit?”

The contentious interaction appears to have taken place near AT&T park —  Austin can be heard arguing that the sales took place on her property, to which Ettel responded: “This is not your property.”

In late April, a woman caught on camera calling the police on two African-American men for using a charcoal grill in a non-designated spot near Lake Merritt in Oakland earned the name “BBQ Betty.”  The incident inspired a Saturday Night Live skit.

NBC News contributed to this report.