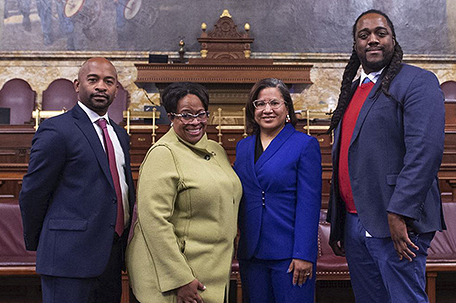 The following members were installed as officers:

In her remarks as the returning chair of PLBC, Bullock recognized the 50 years since the organization was formed in the legislature.

“This is a moment 50 years in the making,” she said. “We are sending folks to Congress, the lieutenant governor’s office, all over this country to continue the good work that we do here in the General Assembly. Two years before the PLBC was formally formed, Black members met in secret. We are not meeting in the shadows anymore. We are doing the work. We are getting the job done. This year, with the largest and the most diverse PLBC membership in our commonwealth’s history, we represent Black, Latino and Asian communities across the Commonwealth. While we center our policies on Black Pennsylvanians, we acknowledge that it’s with our coalition — together — that we are stronger. This coalition of leaders of color will no longer be silenced. But tonight, I’m inspired by us — the collective of us — and what we can do together. We have the power to move some mountains and shake some tables and I’m ready to get things shaking.”

Established as an official caucus in 1973, the Pennsylvania Legislative Black Caucus was formed to empower Black legislators and to serve as an information and advocacy vehicle to advance the interests of Black, Latino, and other Pennsylvanians of color. Many of the original members were afraid to meet in an open forum and had previously met in secret to establish a shared legislative agenda.