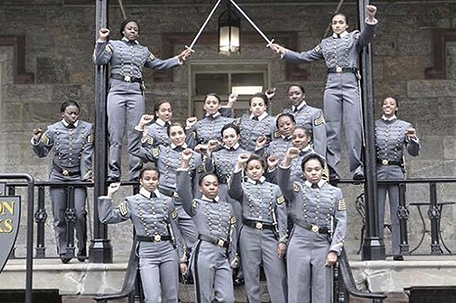 Self-expression is hardly a part of life for cadets at the United States Military Academy.

So it was far from ordinary when 16 Black women put their own spin on the traditional graduation photo, hoisting their fists in the air while posing in their dress uniforms, swords at their sides.

A social media firestorm followed. So did an internal inquiry at the school.

Some viewed the cadets’ pose as a gesture of racial solidarity and strength. Others questioned whether it was a statement of support for Black Lives Matter.

West Point officials decided last week that the photo was not politically motivated and no punishment was warranted. Still, that outcome left some black female graduates confused: Why would anyone see controversy in how those 16 women celebrated their experience in the Long Gray Line?

“When I saw it, I said, ‘I wish me and my classmates had taken a picture like that,'” said Shalela Dowdy, a 2012 graduate and a friend of some of the women in the photograph. “But something clicked in my mind that not too many people would be happy about that picture. The fist stands for unity and solidarity, but some people are going to take this the wrong way.”

None of the 16 women would agree to be interviewed for this story. Speaking through black alumnae, they cited a need to focus on their graduation next Saturday, when Vice President Joe Biden will give the commencement address, and life after West Point. For some, that will mean active duty service in the Army. They will become Army officers after leaving the academy.

The picture was one of several the women took in their traditional dress uniforms. A different photo, without the raised firsts, was tweeted by the chairwoman of West Point’s Board of Visitors.

Mary Tobin, who has mentored other black female cadets since graduating in 2003, said few are inclined to discuss their experiences publicly.

“To be a black woman at West Point is essentially to make a choice going in … that the majority of the time, you can never fully express your womanhood or your blackness,” Tobin said. “We’re told we’re all green. We don’t ever talk about it, because it’s hard enough for everyone at West Point to graduate.”

The cadets pictured are joining a rare but proud group of black women who have broken barriers on dual fronts at West Point. In interviews with The Associated Press, black alumnae describe a rewarding experience with challenges that included navigating racial incidents.

Established in 1802, West Point went co-ed in 1976. Four years later, there were 62 female graduates. In that class were the first black female graduates, Joy Dallas and Priscilla “Pat” Walker Locke. West Point has graduated 357 black women in its 114-year history, and the Class of 2016 includes 18 black women.

Blacks have contributed to West Point’s legacy for centuries, from the first African-American cadet, Henry O. Flipper, who graduated in 1877, to 2nd Lt. Emily Perez, a black woman who was the first member of the “Class of 9/11” to die in combat, in 2006.

According to admissions director Col. Deborah McDonald, about 15,000 students apply to West Point each year, and about 9 percent enroll. There were 1,859 black applicants for the incoming freshman class, and 14 percent of them were accepted, McDonald said.

The application process at West Point is rigorous. Most cadets get in with a letter of recommendation from a member of Congress or the vice president. A medical and physical test is required.

“It’s about adopting the culture and the values of the military as an institution,” Outing said. “The mission requires us to develop soldiers and leaders to function and fight as one team.”

Sakima Brown, a 1998 graduate who was the first person from her hometown of Poughkeepsie, New York, to attend West Point, said making it at the storied military academy meant you had to “shrink your blackness.” When she and the other eight black women in her class saw each other on campus, they would greet each other briefly and move on.

Brown, Dowdy and Tobin described a campus life where even the most casual interactions among black students piqued curiosity. For example, they said, fellow cadets, and sometimes staff or faculty, took notice when more than a handful of blacks came together for meals on Sundays, when cadets were not required to eat with their companies.

“There were times we would sit at a table, and if there were more than two or three African-Americans, it was a problem,” Brown said. “People would come over and ask, ‘What are you guys doing?’ I have never seen 10 African-Americans sitting together at West Point. At three or four, the table would get broken up.”

Still, forging friendships was possible. Brown recalls the day an upperclassman stopped her on campus and whispered quickly, “Join the gospel choir.”

“She didn’t ask if I could sing or not sing,” Brown said. “You just joined the gospel choir. It wasn’t just about the singing. It was praying together, the support system. That was the only place you were allowed to be together, and it was once a week for two hours. During that time, you could talk about what was going on. It was the only place we were safe being together.”

Dowdy, now stationed at Fort Bliss, Texas, said when Barack Obama was elected the country’s first black president — and the cadets’ new commander in chief — in 2008, some on campus “were mad, they were disrespectful, saying the n-word.”

“They motivated me when I doubted myself,” she explained. “Sometimes things happen at the school and you don’t know if you want to bring it up, but they were family. I talk to all of them every day still, right now.”

Which is why, Brown said, the backlash over the photograph was hurtful.

“I couldn’t understand why they didn’t see the pride that I saw,” Brown said.

Tobin, who has served as a mentor to some of the women pictured, said she believed all along that their motive was simply to express their joy over graduation.

“You’re looking at each other like, ‘We made it and we did it together,’ and we did it in an environment that still fights the ghosts of discrimination, sexism and homophobia,” said Tobin. “You raise your fist as a sign of victory.”