In Philadelphia, claims of lies from within police force 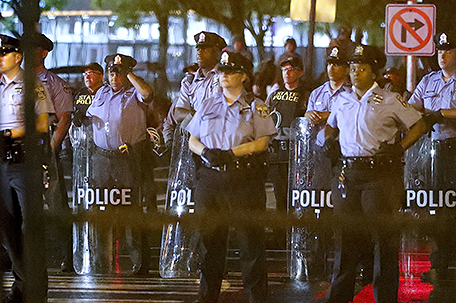 Officers in the Philadelphia Police Department’s narcotics unit have sued their bosses for allegedly ordering them to lie on arrest paperwork about their informants to “make the drugs go away,’’ a practice that experts say raises the possibility of corruption and illegitimate prosecutions.

According to the December civil rights lawsuit, narcotics bureau commanders told their officers to disobey the department’s rules and illegally omit names, change locations and modify other information on documents that are used as evidence during drug prosecutions if the arrestee is willing to become an informant.

“This flipping process is kind of like the quick and dirty way to do the confidential informant process without following the rules required to ensure due process and integrity,’’ said attorney Brian Mildenberg, who is representing the group of African-American plaintiffs that include a staff inspector, a lieutenant and a captain who all work in the narcotics bureau and say they were racially discriminated against for refusing to carry out the request.

The charge made its way into the federal lawsuit after allegations of procedural and racial misconduct in the narcotics unit were announced during a September press conference held by the Guardian Civic League, an organization that represents black police officers and also is a plaintiff in the case. The debate widened in the same month when Philadelphia’s police commissioner told reporters of an ongoing internal affairs investigation into the allegations.

“I personally wish they would have allowed that investigation to go forward before doing a press conference,’’ Commissioner Richard Ross said then.

A police department spokesman would not provide further details but said the probe is still underway.

The department does make rules about recruiting, handling and paying their confidential informants available online. Before an informant can be used in most cases, officers are supposed to compile their biographical data, photographs, criminal records and signatures, according to department guidelines. The directives also state that only the district attorney’s office can grant informants immunity from criminal prosecution.

Experts say police often exercise discretion on whether to arrest a person and may choose not to detain someone in exchange for a quick snippet of information, especially if a suspect can divulge something that could lead to the dismantling of a criminal enterprise.

But if supervisors ordered police to lie on official paperwork and officers complied, that puts the department in troublesome legal territory, said Eugene O’Donnell, a former New York Police Department officer and prosecutor who is now a lecturer at John Jay College of Criminal Justice in Manhattan.

“If officers concealed or destroyed evidence or made false statements about cases, or failed to turn over exculpatory information to prosecutors, it could have sweeping implications for past and current cases,’’ O’Donnell wrote in an email.

“The exact circumstances of search, seizure and questioning should be truthfully divulged,’’ he said.

Even though the allegations in the federal lawsuit have not been proven, they are already spurring legal battles in Philadelphia.

In at least one criminal case, lawyers for a man charged with drug possession have argued in court filings that authorities should release the names of officers and identifying numbers of informants who are targets of the ongoing internal probe in the narcotics bureau.

The defense attorneys say that their clients are “suffering ongoing due process violations’’ because the lawyers don’t have access to material that could exonerate their clients, according to court documents. For instance, if the officer who detained a person is revealed to be under investigation for falsifying arrest paperwork, lawyers could point to that as a reason why the officer’s account of an incident may not be truthful.

Prosecutors in that case have responded in a motion that called for the request to be dismissed because the information is part of a continuing investigation.

“We never want a police department that teaches people that it’s OK to falsify records because we never know what’s going to happen next,’’ said Jules Epstein, a law professor at Temple University in Philadelphia. “Once a cop’s lied once and gets caught that’s going to have a ripple effect in other cases where the cop may have told the truth.’’