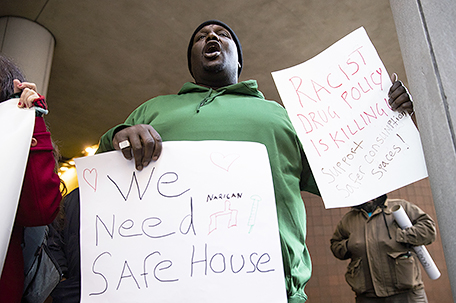 ABOVE PHOTO: A protester holds signs in support of a supervised injection sites in Philadelphia. On Tuesday, Jan. 12, 2021, a divided appeals court rejected a plan to open a supervised injection site in Philadelphia to try to reduce overdose deaths, concluding the operation would violate a 1980s-era drug law aimed at “crackhouses.” (AP Photo/Matt Rourke)

HARRISBURG, Pa.  — Overdose deaths in Pennsylvania grew along with the national rate last year during the pandemic, according to new federal estimates.

The COVID-19 pandemic contributed to the overdose epidemic, as lockdowns and other pandemic restrictions isolated those with drug addictions and made treatment harder to get, experts said.

The federal agency reviewed death certificates to come up with the estimate for 2020 drug overdose deaths.

However, last year’s increase interrupted what had been a decline, as Gov. Tom Wolf’s administration took steps to stem the flow of pharmaceutical opioids and get the overdose antidote naloxone into the hands of police, emergency-room personnel, ambulance crews and more.

In the meantime, coroners, law enforcement and state officials have reported that methamphetamine and cocaine use are on the rise while prescription drug and heroin deaths were leveling off.