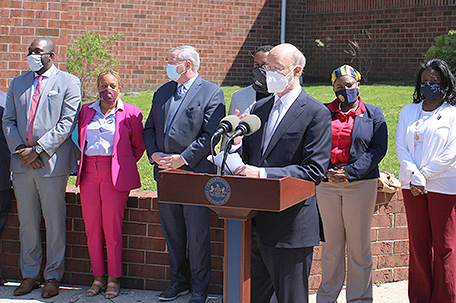 A wave of gun violence that began last January 2020 and has been exacerbated by the pandemic  continues to take away the freedoms in our neighborhoods. This violent behavior has become another pandemic in the Black and brown communities.

A press conference was held on April 23 at the YMCA located at 52nd & Chestnut Streets to bring attention to this problem in the city and throughout the commonwealth.

“We’re here, collectively, first to begin the process of organizing ourselves in a way we’ve never organized before,” Williams said.

“The last tragic shooting was [of] a 6 year-old and the murder of his young father. I called the governor and I called the attorney general. This community is overwhelmed and the city is being overwhelmed with this level of violence and it requires our presence. We are here, shoulder to shoulder with our allies.”

“To see the impact is legendary,” Williams continued. “Historic numbers. They agreed that we had to hit the ground running in Philadelphia. We worship here, we’re neighbors here and our families are here. These communities have been overwhelmed and we live here. We have to change the narrative that death[and]gun violence is a part of a Black and brown community.”

When these murders and killings occur, there are always  grieving mothers, fathers and families  left behind that experience a broken spirit and emptiness.

“The violence has ripped through the hearts of all of our communities in Pennsylvania,” Shapiro said.

Gauthier spoke about what’s needed to help address this issue.

“We need the state and the city to put many more resources into prevention and intervention,” Gauthier said. “So, that means more resources to the people who are on the ground [like] neighborhood groups that are working hard to bring down violence in their communities.That means resources to mentor young people in our communities to support them and connect them to help change their lives.”

Residents came out to listen, voice their concerns and see what the solutions can be found.

“The violence in Philadelphia extends to not even having a job,” Russell Price, who grew up in West Philly, said.  “It’s not raising your kids right. You know, and some of the children are raising the parents. They (the kids) come home and you should know whether or not your daughter or son is selling drugs and where they are. You ought to know that. You just got to mind your kids and find out what they’re doing. You have to love your kids.”

“I think they needed it (the news conference),” saidTabitha Nelson of West Philadelphia. “With all the things that is going on in this city, these kids need to do things in the community. I will be willing to help, volunteer with the teenagers and kids. Because, I have two teenage sons and this stuff needs to stop. You can’t even go the playground and have fun with the kids and play basketball. I want to support this.”

Last year, the city amassed 499 killings through gun violence. The mayor, police commissioner, district attorney and others are trying to get ahead of this terrible trend in the city. This year, there have been over 100 fatalities as a resu;lt of  gun violence.

“We are addressing poverty and getting crime down,”Kenney said. “This will enable us to seek another $35.5 million dollars for crime prevention initiatives, which we hope will pass. If we can get [it] and we’ve got the commitment from our partners, we will be able to match that or even exceed that, and I’m glad to have all the help we can get. I appreciate their desire to help us with this unprecedented crime. The availability of guns in this Commonwealth of Pennsylvania is insane.”

I also asked Mc Clinton what the “grass roots” response should be to this pandemic of gun violence in the city.

“The amount of coordinated effort that was given to address the pandemic of coronavirus must be dedicated to address the pandemic of gun violence,” Mc Clinton said.  “So, we have neighborhood organizations that do a lot of work with young people. And then, we also have groups that do job training for adults. We have to make sure that those organizations are not just operational, that they are funded so that they have the capacity to be able to reach out some more.”

“Because the truth of the matter is, it’s a very small amount of folks that are the bad apples,” she added. “We have to figure out how to get to people before they get into that pipeline.  We have to be straight up and honest with law enforcement. Because one of these challenges we’re facing right now is that crimes are not being solved. The police departments these days are overwhelmed and the detectives are trying to do their jobs.”

“If you want to see changes in the gun laws, write, lobby and contact the legislators who are Republican,” McClinton concluded. “And it’s unfortunate, even when children are dying — not only here in Philadelphia. So I look forward to this being one step, but many more to come in the near days. Those are the marching orders.”

The residents of the city and state simply want these elected officials to put their tax payer dollars where their mouths are and reduce this problem of gun violence.