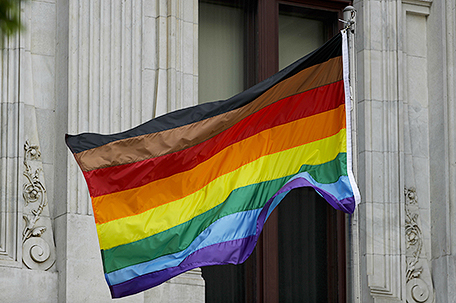 ABOVE PHOTO: In this Monday, June 19, 2017, Philadelphia’s altered gay pride flag is seen outside City Hall. Gay pride marches in New York City, San Francisco and in between this weekend will have plenty of participants, and also protests directed at them from other members of the LGBT community. They say increasingly corporate pride celebrations prioritize the experiences of gay white men and ignore the issues continuing to face black and brown LGBT people. (AP Photo/Matt Slocum)

HARRISBURG, Pa. — Pennsylvania government regulations would be revised with extensive definitions of sex, religious creed and race under a proposal set for a vote on Thursday — a change some Republican lawmakers see as an overreach on a subject they think should not be addressed without legislation.

The proposal before the Independent Regulatory Review Commission would enshrine into writing a set of definitions regarding the types of employment, housing, education and public accommodations discrimination complaints that can be brought before the state Human Relations Commission.

Advocacy groups say greater clarity about the terms sex, religious creed and race would be a significant step forward, building on a 2018 decision by the commission to start accepting complaints about anti-LGBTQ+ discrimination.

“There are some issues where it’s very clear where the discrimination has happened or hasn’t happened,” said Rachel Wentworth, executive director of the Fort Washington-based Housing Equality Center of Pennsylvania. “But there’s a lot of gray areas, areas where the laws are worded in a way that’s more broad. So we really welcome any type of regulation or guidance which clarifies some of what’s covered under those laws.”

The proposal would define “sex” as including pregnancy, childbirth, breastfeeding, sex assigned at birth, gender identity or expression, affectional or sexual orientation and differences in sex development.

“Race” discrimination would include ancestry, national origin, ethnic characteristics, interracial marriages and association, traits such as hairstyles that are historically associated with race, and national origin or ancestry.

And “religious creed” would cover all aspects of religious observance, practice and belief.

In a May letter to the Independent Regulatory Review Commission, state Rep. Seth Grove (R-York) argued the new definitions were in effect an end-run around the Legislature.

“The policy choice of whether Pennsylvania should extend the definition of ‘sex discrimination’ in such a manner remains just that: a policy choice,” Grove said. “As such, it is squarely and exclusively the prerogative of the General Assembly to pursue.”

Rep. Dan Frankel, (D-Allegheny), a longtime proponent of LGBTQ+ nondiscrimination bills, said Republican opponents “have blocked every attempt that we’ve had on the House floor to do this. So that provides plenty of rationale to proceed on the regulatory basis.”

The Pennsylvania Catholic Conference, the public affairs arm of the state’s bishops, said the sex discrimination proposal will hurt small businesses and religious entities and would not protect religious freedom. State law permits religious organizations to hire or employ on sex-based grounds when that is a bona fide part of the job.

Democratic Gov. Tom Wolf’s press secretary, Beth Rementer, said he favored making changes through state law. “Unfortunately, given Republican led efforts to push legislation that only seeks to discriminate and bully individuals and their refusal to take up commonsense bills, this action through regulation is one more way the administration can protect Pennsylvanians,” Rementer said.

Commission Chairman Joel Bolstein said in an interview this week that the proposal won’t force religious organizations where priests must be male to hire females and that the state’s Religious Freedom Protection Act also provides some legal protections.

A group of 11 Republican state senators also weighed in against the regulatory change, saying it “operates in contrast to the intent of the legislature, lacks prescribed statutory authority and ultimately garners our disapproval.”

The Pennsylvania Chamber of Business and Industry said it supports “the intent” of the commission’s proposal and that at the group’s request some changes were made, including a two-month delay on implementation.

“Generally, advancing public policy through administrative regulation, instead of codifying it in law through the legislative process, can create challenges — including potentially drastic policy swings from one administration to the next and lack of input from a broad coalition of stakeholders,” said the chamber’s government affairs vice president, Alex Harper.

Although many municipalities in the state have nondiscrimination ordinances that address sexual orientation, gender identity and expression, that is not the case statewide.

In 2018 the Human Relations Commission announced it would accept and investigate such complaints as sex-based discrimination.

Although the change was announced in a press release, and it has produced largely employment-based complaints, there are indications many people were not aware of the 2018 policy change, Bolstein said.

The proposed regulation, he said, “will provide clarity to the universe of people who could be complainants and respondents in cases before PHRC.”

“We think it’s clarification that’s necessary and helpful, and it’s in the public interest,” Bolstein said.