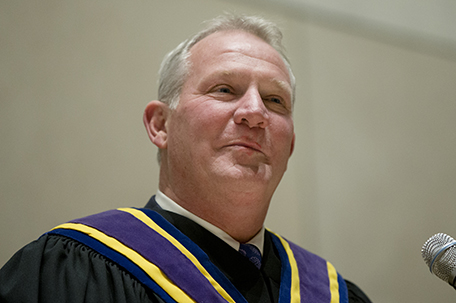 ABOVE PHOTO: In this Tuesday, Jan. 5, 2016 photo Pennsylvania Supreme Court Justice Kevin Dougherty speaks at his swearing in ceremony at the National Constitution Center in Philadelphia. (AP Photo/Matt Rourke)

HARRISBURG, Pa. — Pennsylvania’s highest court broke a partisan deadlock Wednesday over a new map of congressional districts by selecting boundaries that broadly adhere to the outlines of current districts, even as the state loses one seat because of sluggish population growth.

The Democratic-majority state Supreme Court in a 4-3 decision picked a 17-district map that had been proposed by a group of Democratic-aligned voters who sued last year in an effort to get the court involved.

It is unlikely to create a big shift in the makeup of the congressional delegation, as the state loses a seat, going from 18 to 17, to account for relatively stagnant population growth in census findings over the past decade, particularly in rural white areas predominantly represented by Republicans.

It had some wins for Republicans and some wins for Democrats on a map whose stated aim was to stick as closely as possible to districts drawn by the high court in 2018 to replace a six-year-old map it found to be unconstitutionally gerrymandered by Republicans.

The new map provides eight Republican-leaning districts, six Democratic-leaning districts and three closely divided districts, according to an analysis by FiveThirtyEight, a website that focuses on opinion poll analysis, politics and sports.

Nine of the districts were won by Democrat Joe Biden in 2020’s presidential election, according to an analysis by Redistricting & You, while Republican Donald Trump won eight. It also pits two Republican incumbents against each other.

Pennsylvania’s delegation is currently split evenly, nine Republicans and nine Democrats, in a state where registered Democrats outnumber Republicans by 4 million to 3.4 million.

The court has selected boundaries twice before in the past three decades, and it’s decision is expected to be the final word, although a federal court challenge by Republicans is pending.

Former U.S. Attorney General Eric Holder, who leads the National Democratic Redistricting Committee and whose affiliate organization, the National Redistricting Action Fund, backed the court-selected map, called it a “substantial win for Pennsylvanians who now get to vote for the candidate of their choosing in fair, lawful districts for the next decade.”

Gov. Tom Wolf, a Democrat, said he was pleased with the decision.

“It is a fair map that will result in a congressional delegation mirroring the citizenry of Pennsylvania,” Wolf wrote.

Pennsylvania’s national Republican committee member, Andrew Reilly, said it was unfortunate that the court majority chose a map that combines two safe Republican districts into one, makes a suburban Pittsburgh seat friendlier for Democrats and was represented in part by the firm of a “partisan” Democratic Party-aligned lawyer.

“Despite that partisan choice, Pennsylvania Republicans will be ready to favorably compete in these districts to assist the National Republican Campaign Committee in taking back the U.S. House in November,” Reilly said in a statement.

The court ended up with the decision after Wolf and the Republican-controlled Legislature deadlocked on a new plan.

Four of five Democrats on the court formed the majority in Wednesday’s decision, while one Democrat, Justice Debra Todd, sided with the court’s two Republicans in opposing it.

In picking the new map, the justices also rejected a lower court judge’s recommendation of a map backed by Republican lawmakers that Democrats had opposed.

The new map lumps two Republican incumbents — Glenn Thompson and Fred Keller — into a sprawling northern district, and draws two Pittsburgh-area districts where there are no sitting incumbents running for another term.

Neither Thompson nor Keller immediately said whether they would run again.

Of the map’s Republican-leaning districts, one is held by a Democrat, Matt Cartwright in northeastern Pennsylvania.

The swing districts are held by Allentown-area Democrat Susan Wild, Republican Brian Fitzpatrick of suburban Philadelphia’s Bucks County and suburban Pittsburgh Democrat Conor Lamb, who is not running for reelection.

The map sides with Republicans on two big issues.

However, the map also sides with Democrats on certain aspects.

It ensures each Democratic incumbent has their own district and it keeps the metropolitan Harrisburg area in one district with York, instead of splitting it into several districts, as Republicans had sought.

Still, the map will put more pressure on Wild to get reelected, drawing her new district to include conservative Carbon County.

The court also adjusted the petition gathering schedule — starting this Friday going until March 15 — but left the May 17 primary date intact for congressional races and statewide contests.

However, the court on Wednesday suspended the primary election calendar for state legislative candidates, because new state House and Senate district maps are being challenged in court.