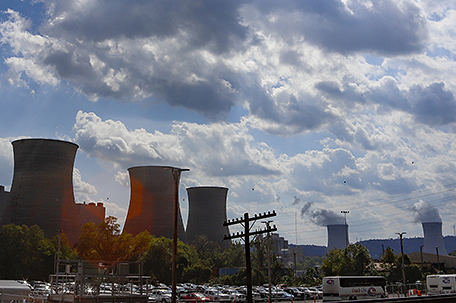 ABOVE PHOTO: The Bruce Mansfield power plant in Shippingport, Pa., is seen from across the Ohio River from Industry, Pa. on Thursday, Oct. 3, 2019. Owners of coal-fired power plants, like the Bruce Mansfield plant that is scheduled to close next month, could pay more to emit carbon dioxide under Pennsylvania Gov. Tom Wolf’s plan announced Thursday to bring Pennsylvania into a nine-state consortium that sets a price and limits on carbon dioxide emissions from power plants to help fight climate change. (AP Photo/Keith Srakocic)

By Marc Levy And Michael Rubinkam

Commonwealth Court, in a one-line unsigned order, said it will not allow the official publication of the regulation “pending further order of the court.”

The regulation would require fossil fuel-fired power plants to pay a price for every ton of carbon dioxide they emit starting July 1 in a state that has long been one of the nation’s biggest polluters and power producers.

The regulation was to be published on Saturday. But the court sided with leaders of the Republican-controlled Legislature, who just a day earlier had failed in their final legislative attempt to block the regulation.

Wolf’s administration said Tuesday night only that it was reviewing the order and is “committed to ensuring that this regulatory process continues to move forward.”

Republican lawmakers in the nation’s No. 2 natural gas state and its No. 3 coal-mining state contend that the regulation is an illegal use of regulatory authority. They say legislative approval is required to force power plants to buy hundreds of millions of dollars in credits annually that the state could then spend on clean energy or energy efficiency programs.

Wolf in 2019 ordered his administration to start working on a regulation to bring Pennsylvania into a multi-state consortium of Northeastern and mid-Atlantic states, called the Regional Greenhouse Gas Initiative, which sets a price and declining limits on carbon dioxide emissions from power plants.

The plan has won approval from regulatory bodies and signoff by the governor’s office of general counsel and the attorney general’s office under reviews for form and legality.

Wolf has insisted that his administration has the authority to regulate carbon dioxide under existing state air pollution laws and Democratic lawmakers say the measure is desperately needed to act against climate change and speed up Pennsylvania’s transition to the future of a clean energy-based economy.

Opponents have included coal- and natural gas-related interests, industrial and business groups and labor unions whose workers maintain power plants, build gas pipelines and mine coal. It has backing from owners of higher-efficiency gas plants, nuclear plants and solar and wind power installations.

Senate Environmental Resources and Energy Committee Chairman Gene Yaw, R-Lycoming, called the court’s order “a welcome step in the right direction” given how much it will increase electricity costs.

Wolf’s administration has estimated that the program would increase electricity bills in the short-term, but bring them back down by the end of the decade as money from the credits is spent on energy efficiency programs that ultimately result in lower electricity use.

The Independent Fiscal Office, a nonpartisan legislative agency, agreed that higher auction prices could result in higher consumer electric bills. Using methodology developed by the state Department of Environmental Protection, the fiscal office recently calculated that electric bills could rise by about $4.40 to about $6.20 per month.

In consortium states, owners of fossil-fuel power plants with a capacity of 25 megawatts or more must buy a credit for every ton of carbon dioxide they emit.

That theoretically gives fossil fuel plants an incentive to lower their emissions and makes non-emitting plants — such as nuclear, wind and solar — more cost competitive in power markets.

In recent months, the price of a credit has shot up, almost quadrupling, increasing the price that dozens of Pennsylvania power plants fueled by coal, oil and natural gas would have to pay.

Michael A. Mehling, deputy director of the Center for Energy and Environmental Policy Research at the Massachusetts Institute of Technology, attributed the rising cost of credits to the rising price of natural gas and rising demand from more investors taking climate policies more seriously.