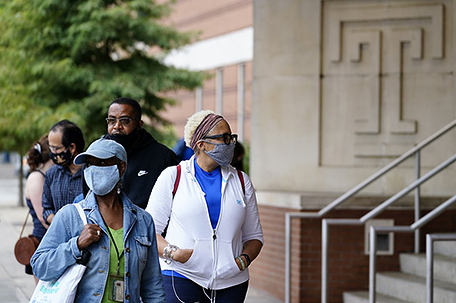 HARRISBURG, Pa. — Pennsylvania’s counties pressed lawmakers and Gov. Tom Wolf to allow them to process mail-in ballots before Election Day in the battleground state as they consider the prospect of waiting until polls open to dig into what could be 3 million or more envelopes.

Allowing as many as 21 days to process mail-in ballots before Election Day has been the counties’ top election priority for months, a request backed by Wolf and his fellow Democrats.

But it remained stuck Tuesday in a wider dispute between the Democratic governor and the Republican-controlled Legislature amid a high-stakes presidential election and partisan lawsuits over how mail-in ballots should be collected and counted.

The debate is happening amid President Donald Trump’s persistent attacks on the legitimacy of mail-in ballots, following his comments Saturday evening in a rally in Pennsylvania that Democrats are “going to try to steal the election.”

County officials say processing mail-in ballots before Election Day will speed up vote counting amid concerns that a presidential election result will hang in limbo for days on a drawn-out vote count in Pennsylvania.

In a pointed message on Twitter, the County Commissioners Association of Pennsylvania said “we don’t want Pennsylvania to become a national news story.”

Diane Ellis-Marseglia, chair of Bucks County’s commissioners, estimated that processing ballots before Election Day would allow her county to tabulate them all within 12 to 15 hours after polls close. Otherwise, she said, it could take three days with election workers working around the clock.

“If they would just do that, that’s it, that’s all we really need,” said Ellis-Marseglia, a Democrat.

In Delaware County, another heavily populated county outside Philadelphia, Councilwoman Christine Reuther said voters in the Democratic-leaning county are increasingly concerned. She said they are worried about rhetoric that Trump will have a large election night lead, based on the in-person vote, and then cry foul when the lead shrinks or disappears as mail-in ballots, primarily from Democrats, are counted in the ensuing hours and days.

The Legislature could head that off by allowing ballots to be processed before Election Day, Reuther said. That could mean that 75% of mailed-in ballots would be counted by 11 p.m. on election night, she said.

“It shouldn’t be people saying, ‘Well, these results coming in after Election Day shouldn’t count because the election’s rigged,’ and that’s been the rhetoric and the drumbeat,” Reuther said.

A Trump campaign spokeswoman, Thea McDonald, said that, if mail-in ballots are to be processed before Election Day, it must “be a transparent process with a poll watcher in the room to ensure all rules are followed.”

In Philadelphia, the city on Tuesday opened seven of 17 satellite election offices it plans, where people can register to vote, apply for a mail-in ballot, fill it out and submit it.

Pennsylvania’s state Supreme Court, in a Sept. 17 decision, deemed such offices to be legal under current law, over opposition by Republicans and Trump’s campaign.

Trump, meanwhile, retweeted claims on Twitter on Tuesday by his son Eric and a campaign staffer that Trump campaign officials were being “blocked” or “kicked out” of newly opened satellite election offices in Philadelphia.

However, election lawyers say there is no right in state law, even for a certified poll watcher, to observe inside an election office where someone is registering to vote, applying for a mail-in ballot or filling one out.

Poll watching is already being litigated by the Trump campaign, which has sued in federal court to invalidate a provision in state law that limits poll watchers to residents of that county. Republican lawmakers also have pushed to remove the provision from law.

In his 2016 campaign, Trump again claimed that the only way he could lose Pennsylvania is if there is “cheating,” and he singled out Philadelphia as a city to watch during an October campaign stop in the state.

Democrats, however, say Republican efforts to remove the county residency requirement are part of a campaign of voter intimidation and suppression to target Democratic voters in Philadelphia and elsewhere. Trump lost in the Democratic bastion to Hillary Clinton in 2016 by 67 percentage points, or about 475,000 votes.