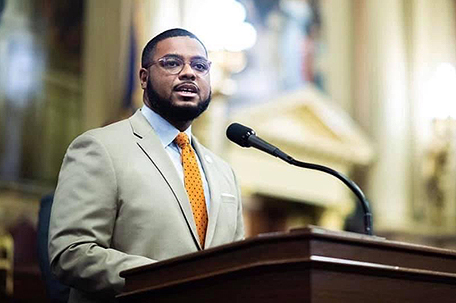 McKeesport, Pa. – State Rep. Austin Davis (D-Allegheny) has launched his campaign for Lt. Governor with unprecedented statewide support, including endorsements from Attorney General Josh Shapiro, Governor Tom Wolf and all of State House and Senate Democratic leadership, along with majorities of the Democratic caucus of both chambers and elected leaders in federal and local office.

“Pennsylvanians – from Westmoreland to West Philadelphia – deserve leaders who understand the issues they’re facing and can bring people together to get things done. Throughout his career, Austin Davis has fought for the people of Western Pennsylvania and stood up for families who work hard to make ends meet and communities that have been forgotten,” Shapiro said. “When leading Montgomery County or now as attorney general, I’ve always surrounded myself with people who bring different life experiences to my team – and I’m proud to endorse Austin Davis because I know he will make my administration stronger as our next lieutenant governor.”

“We need leaders in Pennsylvania who know how to work hard and fight for working people and communities like McKeesport, and that’s exactly what Attorney General Shapiro has done throughout his career,” Davis said. “Pennsylvanians, regardless of color, class, or creed, need someone in their corner, and I’m looking forward to taking on the big fights and getting things done as lieutenant governor alongside our next governor, Josh Shapiro.”

“I am incredibly proud to endorse Austin Davis to be Pennsylvania’s next Lieutenant Governor. As the son of a bus driver and a hairdresser, Austin understands the challenges working families across our Commonwealth face because he’s lived them,” said House Minority Leader Joanna McClinton (D-191st Dist.). “Austin’s life experience has guided his public service, from his time in the Allegheny County Executive office to serving his hometown of McKeesport in the State House. As the first woman to lead the Democratic caucus, I understand what it means to bring the voice of working people to state government — and I know Austin will work every day to fight for Pennsylvanians as our next lieutenant governor.”

“Austin Davis is a remarkable leader with a heart to serve. I saw it up close when he was an indispensable member of my team, always advocating for the interests of everyday people when decisions were being made, especially those of the working families of Allegheny County. Austin never forgot his upbringing in the Mon Valley and has never stopped fighting for the people of his community, whether it be during his time as student body president of his high school starting programs to reduce youth violence, as an advisor in the County Executive’s Office, or as a state representative, representing his hometown of McKeesport,” said Allegheny County Executive Rich Fitzgerald. “I could not be prouder to endorse Austin’s campaign for Lieutenant Governor and I have no doubt in my mind that he and Attorney General Shapiro will be transformational leaders for our Commonwealth.”

Growing up in the Mon Valley in Western Pennsylvania – a longtime industrial center outside Pittsburgh – Davis saw the struggles of working families firsthand. He watched his mom – a hairdresser in McKeesport for more than 40 years – work hard to build a small business, and he watched his dad work hard every day as an ATU bus driver.

In high school, when he felt young people needed a voice in city government, Austin founded and served as chairman of the Mayor’s Youth Advisory Council under McKeesport Mayor Jim Brewster. Working with city leaders, Austin helped combat rising youth violence and provided the young people of McKeesport with more opportunities to get involved in civic life.

Austin is a first-generation college graduate in his family, and after studying political science at the University of Pittsburgh, he began pursuing a career in public service. By the age of 21, the Tribune-Review called him “a veteran at the politics of helping others.”

In 2012, Davis joined Allegheny County Executive Rich Fitzgerald’s team, spearheading the office’s vision and transition teams in the early days of the administration, and serving as Fitzgerald’s representative on the Jail Oversight Board; the Kane Foundation; the Minority, Women, and Disadvantaged Business Enterprise Advisory Board; and the Shuman Detention Center Advisory Board.