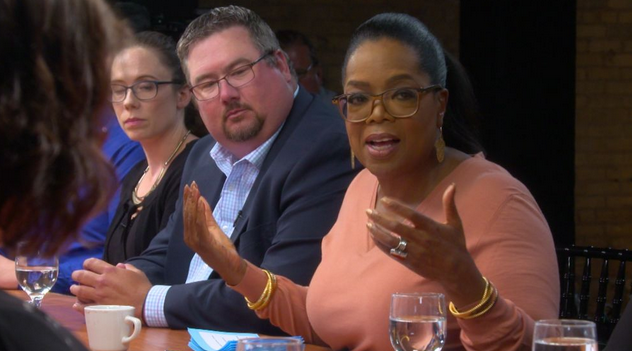 Oprah Winfrey convened a group of voters to examine the nation’s bitter political and cultural divide in her first segment as a special contributor to CBS’ “60 Minutes.”

Winfrey held a roundtable session with 14 voters from West Michigan, evenly split between Donald Trump supporters and detractors. Winfrey pressed the group on Trump’s track record as President, whether his tweets are “modern presidential,” the need for limitations on free speech, and their perceptions of Trump vs. Hillary Clinton voters.

The group also debated the question of whether Trump’s response to the white supremacist violence last month in Charlottesville, Va., was appropriate or whether he wrongly sought to draw a moral equivalency between far left protestors and the hate groups that organized the rally.

The responses underscored the depth of the disconnect between Americans of different backgrounds, whether political, geographical or lifestyle-focused. Participants included a farmer, a former General Motors factory worker, a drug counselor, a speech therapist, and a sales manager.

Winfrey logged 25 years as a top-rated talk show host, but she let the participants do most of the talking during the segment. “Does the president’s response (to Charlottesville) say anything to you about his moral leadership,” she asked at one point. The responses were predictably divided.

At one point, a few participants agreed tensions are so fraught that there are genuine fears that civil war could break out. A woman identified as Kim tried to explain the cause of the cultural dissonance.

Winfrey concluded the segment by noting that the discussion ran for three hours. The participants gathered at a restaurant afterward and continued talking late into the night. She added that five of the participants went to a gun range last week in an effort to understand one another on the issue of gun rights.