Okoumou thought police would kill her on the Statue Of Liberty 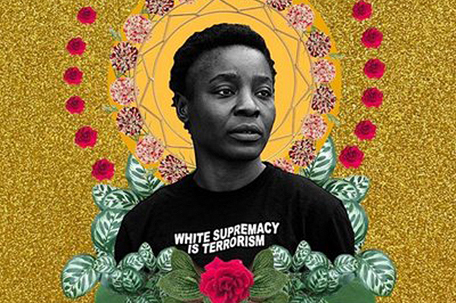 She speaks out about her daring act of resistance against Trump on the Fourth Of July.

Therese Patricia Okoumou recently spoke out about her bold protest at the Statue of Liberty on the Fourth Of July. Okoumou, 44, a Black woman and native of the Republic Of Congo, knew that she risked her life — and that police officers could have fatally shot her — as she stood up against the caging of migrant children ordered by the Trump administration.

“I said ‘Don’t come up,’” Okoumou told The Guardian, referring to the unnamed police officer who tried to get her down before she was taken into federal custody. “He said ‘I care about you.’ I said, ‘No, you don’t, you could shoot me the way you shot Claudia Gomez and killed the trans woman.” Okoumou referred to Gomez, the 20-year-old Guatemalan woman shot by the border patrol in Texas last month, and Roxana Hernández, from Honduras, who died in ICE custody in May after reportedly spending five days in a detention holder cell called the “ice box.”

Okoumou believed she would be shot or tranquilized. However, her defiant act had to be done, she noted.

The woman, who had taken part in New York activist group Rise And Resist’s “Abolish ICE” protest at the Statue of Liberty earlier that day, found herself standing 30 meters above the ground and crouched in folds of the statue’s green robes. Police eventually circled around and grabbed her, taking her into custody in an action similar to the containing of immigrant children at detention centers. She felt more empathy for those 2,000 to 3,000 children who were separated from their parents at the U.S.-Mexico border. “I felt peaceful, that I was with those children in spirit,” she said. “I could feel their isolation and their cries being answered only by four walls.”

Okoumou was charged with three misdemeanors in federal court on Thursday. However, she still remains strong in spirit, taking a cue from Michelle Obama.

“Michelle Obama – our beloved first lady that I care so much about – said, ‘When they go low, we go high,’ and I went as high as I could,” she said.