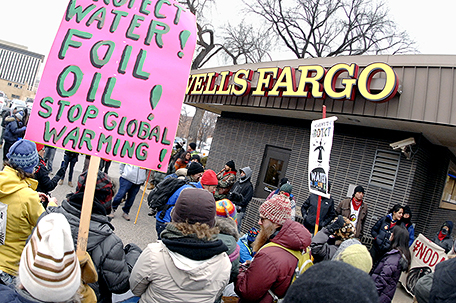 By James MacPherson and Blake Nicholson

CANNON BALL, N.D. — Authorities on Monday defended their decision to douse protesters with water during a skirmish in subfreezing weather near the Dakota Access oil pipeline, and organizers said at least 17 protesters were taken to the hospital – including some who were treated for hypothermia.

Protesters trying to push past a long-blocked bridge on a state highway late Sunday and early Monday were turned back by authorities using tear gas, rubber bullets and water hoses.

At least 17 protesters were injured severely enough to be taken to hospitals, said Dallas Goldtooth, an organizer with the Indigenous Environmental Network.

“Hypothermia, a number of head injuries from being shot with rubber bullets, one individual had a heart attack,” he said.

Daniel Kanahele, 64, a native Hawaiian who joined the protest last week, said he was hit with tear gas, water spray and a rubber bullet in a leg, and “it took me off my feet.” He was treated at the scene but said many other protesters suffered more serious injuries.

Although Goldtooth said a water cannon was used to douse the protesters, Morton County Sheriff’s spokesman Rob Keller denied that. Keller said a tactical vehicle spraying tear gas has been mistaken by some people as a water cannon.

Keller did confirm that water hoses owned by the Mandan Rural Fire Department were used to put out fires set by protesters and to turn back protesters during a violent clash that was “rapidly unfolding.”

“Water hoses were used to keep distance between officers and criminal agitators and also to put out fires set by those agitators,” he said.

Goldtooth said the fires were set to warm people soaked with water. He criticized authorities’ use of water on a frigid night.

Sierra Club Executive Director Michael Brune issued a statement calling the use of water an “act of brutality” and “nothing short of life-threatening and inhumane.” Greenpeace spokeswoman Mary Sweeters called it “nothing short of horrific” and said it “put people’s lives in danger.”

Standing Rock Sioux Chairman Dave Archambault didn’t immediately respond to a request for comment, nor did Tarah Demant, spokeswoman for the human rights group Amnesty International, which has had observers at the protest area.

Keller said the American Red Cross set up an emergency shelter in Fort Yates for any protesters needing help.

The skirmish began Sunday evening after protesters tried to remove two burned-out trucks on what’s known as the Backwater Bridge, not far from the encampment where they’ve been for weeks as they demonstrate against the pipeline. The Morton County Sheriff’s Department estimated 400 protesters sought to cross the bridge on state Highway 1806.

The sheriff’s department said in a statement that law enforcement officers “had rocks thrown at them, burning logs and rocks shot from slingshots,” and that one officer had been hit on the head by a thrown rock. One person was arrested.

Rema Loeb said he was forced to retreat from the bridge because he feared being doused with water on the freezing night. Others, he said, needed medical treatment after being hit with tear gas.

“It’s been just horrible,” said the 83-year-old Loeb, who traveled from Massachusetts about two weeks ago to join the protests.

The 1,200-mile, four-state pipeline is being built to carry oil from western North Dakota to a shipping point in Illinois. But construction of the $3.8 billion pipeline has been protested for months by the Standing Rock Sioux, whose reservation lies near the pipeline route, and the tribe’s allies, who fear a leak could contaminate drinking water. They also worry that construction could threaten sacred sites.

Pipeline developer Energy Transfer Partners has said no sites have been disturbed and that the pipeline will have safeguards against leaks, and is a safer method of transport for oil than rail or truck. The company has said the pipeline is largely complete except for the section under Lake Oahe, a Missouri River reservoir in southern North Dakota.

Goldtooth said protesters on Sunday night wanted to remove the burned-out trucks on the bridge so that law officers “can see us face to face, who we are, as peaceful water protectors.”

The sheriff’s office in a statement said protesters “engaged in organized tactical movement” and were “very aggressive.”

On Friday, ETP Chief Executive Kelcy Warren said the company is unwilling to reroute the pipeline.

Wall Street protesters: We’re in for the long haul