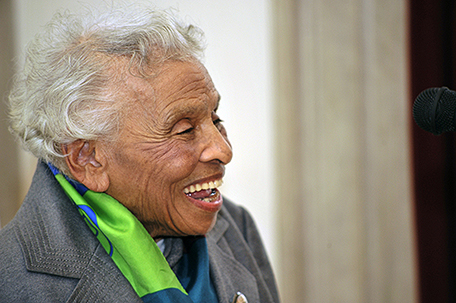 ABOVE PHOTO:  New York- Dr. Olivia Hooker, who holds the distinction of being the first African-American woman admitted into the U.S. Coast Guard in 1945, addresses an audience at a Women’s History Month celebration in Manhattan’s Federal Hall on Wednesday, March 30, 2011. Dr Hooker, died last week at her NY home.  She was 103.  (Photo by Petty Officer 1st Class Thomas McKenzie)

After surviving the 1921 Tulsa race massacre at age 6, she went on to live a remarkable life.

Hooker, 103, was 6 years old at the time of the 1921 massacre in Tulsa’s Greenwood District. In one of her last interviews, Hooker told how she and her siblings were covered with a large tablecloth. Her mother instructed them to remain silent while a White mob ransacked their home.

“It was horrifying for a little girl who was only 6 years old trying to remember to keep quiet,” Hooker said.

Hooker was the first African-American woman to join the U.S. Coast Guard. She was also a psychology professor and an activist.

“She wanted to make sure the story was no longer a secret,” Nash-Dyer said. “We, as a state and as a nation, have a horrible way of trying to hide things that are embarrassing and that are tragic.”

During the massacre on May 31, 1921, the Hooker family home was ransacked by a white mob while she and her siblings hid. Her father’s successful clothing store, Samuel D. Hooker and Son, was also destroyed, along with the rest of Tulsa’s thriving black Greenwood District.

“She was just one of the drum majors for justice,” Nash-Dyer said.

The massacre would leave at least 37 dead — though some unofficial estimates put the figure in the hundreds — and about 10,000 people homeless.

“Tulsa, as well as this nation, tried to sweep this tragedy under the rug,” Nash-Dyer said. “With the light of Dr. Hooker and some of the other survivors, (they) would not allow this to rest.”

Hooker has shared the stories of the massacre with national audiences, is one of the founders of the Tulsa Race Riot Commission and filed an unsuccessful lawsuit seeking reparations for survivors.

“She was the first one who, to my knowledge, refused to call the 1921 race riot a riot,” Hall-Harper said. “She said it was not a riot, it was a massacre.”

The event began on May 31, 1921, after a Black man was wrongly accused of raping a White woman. That man was held at the Tulsa County jail and, on two separate occasions, groups of armed Black men offered to protect him and were turned down. As the group of armed Black men returned to the Greenwood District, a White man attempted to disarm one of them and a shot was fired, beginning the violence, according to the Oklahoma Historical Society.

White mobs set fires on the edge of Greenwood during the night. On the morning of June 1, thousands of Whites descended into the district, looting, setting fires and killing Blacks who fought back but were described as outnumbered and outgunned. Authorities did little to quell the violence.

Hooker was honored earlier in November in a Google Doodle for Veterans Day, after she shared her story about entering the Coast Guard and her career there. The Coast Guard named a dining facility in her honor. After her stint with the guard in the ’40s, Hooker returned in the new millennium at 95 to volunteer in the Coast Guard Auxiliary.

“She lived a phenomenal life,” said Hooker’s longtime friend Chief Egunwale Amusan. “Very few people come to the Earth and leave a mark like she did on this planet. She lived a very remarkable life.”

Amusan, who had known Hooker since the early 2000s, spoke about the importance of the activist maintaining the will to share her story to enlighten thousands of people who might have been unfamiliar with her experience a century ago.

“As a survivor of the massacre, I think her greatest impact was her never tiring in the need to seek justice,” said Amusan, who founded the Black Wall Street Memorial March that has been held annually for more than 20 years in the Greenwood District. “It was just something about her spirit that would light up.”