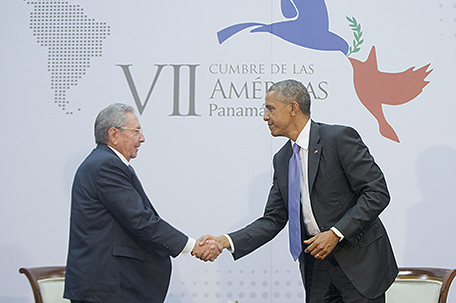 ABOVE PHOTO:  US President Barack Obama shakes hands with Cuban President Raul Castro during their meeting at the Summit of the Americas in Panama City, Panama, Saturday, April 11, 2015.  (AP Photo/Pablo Martinez Monsivais)

WASHINGTON — President Barack Obama will remove Cuba from the list of state sponsors of terrorism, the White House announced Tuesday, a key step in his bid to normalize relations between the two countries.

The terror designation has been a stain on Cuba’s pride and a major stumbling block for efforts to mend ties between Washington and Havana.

Cuba will officially be removed from the terror list 45 days after the president’s message was sent to Congress. Lawmakers could vote to block the move during that window, though Obama would be all-but-certain to veto such a measure.

Tuesday’s announcement comes days after Obama and Cuban President Raul Castro met on the sidelines of a regional summit in Panama. The historic talks marked the first formal meeting between the leaders of their countries in a half-century.

The U.S. has long since stopped actively accusing Cuba of supporting terrorism. When Obama and Castro announced a thaw in relations in December, the U.S. president expressed his willingness to remove Cuba from that list.

However, he held off on making a final decision amid indications that the White House was reluctant to grant Cuba’s request until other thorny issues – such as restrictions on American diplomats in Havana – were resolved.

The president’s final decision followed a State Department review of Cuba’s presence on the list.

Removing Cuba from the terror list could pave the way for the opening of a U.S. Embassy in Havana and other steps. Administration officials said they were optimistic about the prospects of opening the embassy, but did not provide any specific updates in timing.

Cuba was designated a state sponsor of terror in 1982 because of what the White House said was its efforts “to promote armed revolution by organizations that used terrorism.”

Those efforts included support for leftist guerrilla groups in Central and South America that carried out attacks on civilians in their efforts to overthrow U.S.-backed governments.

State Department reports on the terror list specifically mention Cuba sheltering members of the Revolutionary Armed Forces of Colombia, or FARC, and the Spanish Basque separatist group ETA. Cuba has also given shelter to Black and Puerto Rican militants who fled to the island after carrying out attacks in the United States.

Cuba renounced its direct support for foreign militants years ago, and is sponsoring peace talks between the FARC and Colombian government.

Most of the terror list’s direct legal impact is on relatively narrow issues that don’t affect Cuba due to the longstanding trade embargo on the island and deep historical enmity between the two nations. For example, the listing bars U.S. arms sales and other aid to Cuba, an issue that’s been moot for more than a half-century.

However, Cubans say the listing has badly damaged their ability to conduct international financial transactions by frightening banks away from doing business with the communist government. Those who do businesses with state sponsors of terror are vulnerable to lawsuits in U.S. courts.

Cuba’s removal from the terror list will likely make it easier to get credit from non-U.S. banks, transfer funds between countries and conduct a host of other international financial transactions.

White House press secretary Josh Earnest said that taking Cuba off the terror list does not change the fact that the U.S. has differences with the island nation’s government.

“Our concerns over a wide range of Cuba’s policies and actions fall outside the criteria that is relevant to whether to rescind Cuba’s designation as a state sponsor of terrorism,” Earnest said.

The terror list has been a particularly charged issue for Cuba because of what the government there sees as America’s history of supporting exile groups responsible for attacks on the island, including the 1976 bombing of a Cuban passenger flight from Barbados that killed 73 people aboard.

The attack was linked to Cuban exiles with ties to U.S.-backed anti-Castro groups. Both men accused of masterminding the crime took shelter in Florida, where one, Luis Posada Carriles, lives to this day.

Iraida Malberti, the 78-year-old widow of Carlos Alberto Cremata Trujillo, a member of the flight’s crew, said Cuba’s removal from the list was “a joy.”

“Cuba never should have been on the list,” she said, minutes after the decision was announced. “No decision will bring the victims back to life, or erase the humiliation, suffering and pain that this has caused us.”

Until Tuesday, the communist island nation remained one of four countries on the U.S. list of nations accused of repeatedly supporting global terrorism. The others are Iran, Sudan and Syria.