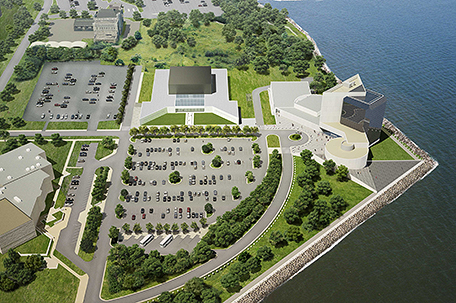 BOSTON — President Barack Obama summoned today’s quarrelsome political leaders to emulate the late Sen. Edward M. Kennedy in the pursuit of compromise on Monday, and said a new institute that bears the longtime Massachusetts senator’s name can be as much an antidote to political cynicism as the man once was.

“What if we carried ourselves more like Ted Kennedy? What if we were to follow his example a little bit harder?” the president asked a crowd of family, former aides and political dignitaries of both parties under a tent in raw weather just outside the doors of the Edward M. Kennedy Institute.

“To his harshest critics who saw him as nothing more than a partisan lightning rode, that might sound foolish,” the president added. “But there are Republicans here for a reason.”

Among them were former Senate Majority Leader Trent Lott of Mississippi, who is on the institute’s board of directors, and Sen. John McCain of Arizona, who said he recalled how much he enjoyed fighting with the Massachusetts colleague in the Senate.

“It’s getting harder to find someone who loves a good fight as much as he did,” said McCain, who has spoken less highly of tea party-aligned members of his own party with whom he has had differences. “The place hasn’t been the same without him.”

The $79 million institute stands next to the John F. Kennedy presidential library on Boston’s Columbia Point. The late senator envisioned the facility before he was diagnosed with brain cancer in 2008. He died in 2009.

The centerpiece of the new facility is a replica of the Senate floor where Kennedy had a desk for 47 years.

Envisioning children visiting the institute and playing the role of senator, Obama said the institute can help change the cynicism that permeates politics. “Imagine a gaggle of school kids clutching tablets, turning cloakrooms into classrooms. Imagine their moral universe expanding as they hear about the great battles” that have been waged in the Senate.

Kennedy was known during his career as a liberal partisan, but the president said Republicans also knew him as “someone who was willing to take half a loaf” and then endure the anger of supporters who had wanted him to hold out for more.

Vice President Joe Biden said Kennedy “treated me like a little brother” when Biden first arrived in 1973, helping him land choice committee assignments not generally available to freshmen senators. He said Kennedy introduced him around the Senate and was a master at generating trust and mutual respect.

“All politics is personal,” Biden said. “No one in my life understood that better than Ted Kennedy.”

Trent Lott noted the irony of his inclusion on the institute’s board of directors, along with former Senate Democratic Leader Tom Daschle. “Yes, a Republican from Mississippi,” said Lott, to laughter and applause, “is proud to be here today.”

Lott said although the two disagreed and had “some fiery discussions,” they came together sometimes in a bipartisan way. Lott recalled after he worked with Kennedy on an immigration bill that lost on a procedural vote in 2007, he told him, “Ted, every time I work with you I get in trouble man.”

“But just think how different things would be now if we passed immigration reform in 2007,” he added to applause.

Kennedy’s widow, Victoria Kennedy, said her late husband hoped the institute would honor the nearly 2,000 who have served there and inspire future senators. She said he wanted visitors to feel the awe of walking into the chamber.

Guests, including student groups, will be able to role-play as senators and debate some of the major issues of the day. The facility also includes a re-creation of Kennedy’s Senate office, virtually unchanged from how it appeared when he died.

“He believed in the majesty of the place and its ability to inspire,” she said. She said he wanted visitors to feel “politics is a noble profession, even if it’s messy, even if it’s hard.”