Obama to ask Congress for cash for roads, bridges 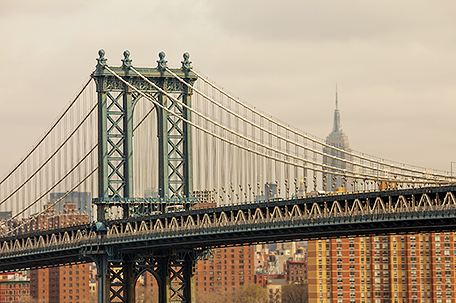 WASHINGTON — America’s roads, bridges and ports are falling apart, and the federal government is running out of money to fix them. So President Barack Obama is heading to a crumbling bridge outside New York City to try to pressure Congress into giving the nation’s infrastructure an infusion of cash.

Obama was to travel Wednesday to the Tappan Zee Bridge, a major crossing point over the Hudson River that’s in dire need of replacement nearly six decades after being built. In addition to calling on lawmakers to back his transportation plan, Obama will promote efforts to cut red tape and delays in permitting, the White House said.

While in New York, Obama will also headline a pair of high-dollar fundraisers benefiting Democratic candidates competing in the midterm elections. He and first lady Michelle Obama will spend the night in Manhattan before attending the dedication ceremony Thursday for the National September 11 Memorial & Museum at the World Trade Center.

Obama’s New York jaunt forms the apex of a weeklong attempt by the White House to focus the nation’s attention on what the administration describes as a looming crisis that, left unfixed, could stifle economic growth and torment the nation’s commuters.

Transportation Secretary Anthony Foxx kicked off the week on Monday, warning that the Highway Trust Fund, which relies on gasoline taxes that haven’t been raised in 20 years, could run dry in August. Vice President Joe Biden added his voice on Tuesday, telling local leaders in St. Louis that “we’ve stalled” on infrastructure as he promoted a $410 million renovation to the famous Gateway Arch that’s being funded largely by donations.

Obama on Wednesday was to announce modest steps to modernize permitting for infrastructure projects, with an eye toward shortening the process. Obama’s plan seeks to improve coordination and synchronization among agencies so projects don’t have to wait for multiple, consecutive reviews, the White House said. Obama also plans to expand an online permitting “dashboard” to include more projects.

The setting for Obama’s call to action, the 3-mile-long Tappan Zee Bridge, currently is being replaced by a new bridge at a cost of $3.9 billion, financed largely by bonds paid for through higher bridge tolls.

The Obama administration has proposed a four-year, $302 billion transportation plan. Of that amount, half would be in addition to the programs paid for with fuel taxes. That additional spending would come from revenue raised by closing corporate tax loopholes and by making other changes in business taxes, a longshot idea in a politically divided Congress.