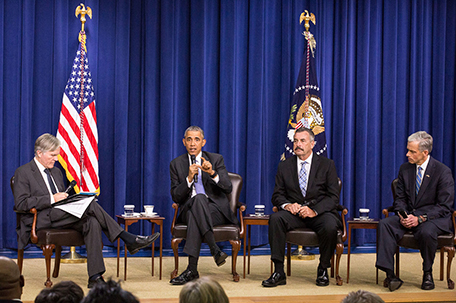 WASHINGTON – The Black Lives Matter movement,  embraced by many and branded as  anti-police by some,  received an endorsement from the nation’s highest law enforcement officer, President Barack Obama, during a special White House session last week to deal with reforming the nation’s criminal justice system.

Speaking to law enforcement officials including 50 of the nation’s top police chiefs, Obama said the movement is addressing an important issue – deaths of unarmed black men and women at the hands of law enforcement — and is not racist or exclusionary, as its critics have claimed.

“And that is a legitimate issue that we’ve got to address.”

The Black Lives Matter movement began shortly after the 2013 acquittal of volunteer security George Zimmerman in the shooting death of unarmed African-American teen Trayvon Martin and has grown continuously with the police-related deaths of numerous unarmed black men across the nation.

“The problem of racial justice or injustice in the society has been a running theme in this country’s history for a very long time,” Obama said, “and so, we just have to make sure that all of us own it.”

Currently, the United States the highest prison population in the world, including China, which has a population more than 10 times larger than the U.S.

To address this, Obama said reform should include fair application of law, proportionality in the sentencing of crime and programs focused on rehabilitation and crime prevention.

“We know we’re spending $80 billion a year incarcerating folks,” he said. “If, in fact, we had smarter sentencing, we thought about how we’re dealing with drug offenses more intelligently, we are working on evidence-based approaches to rehabilitation and reducing recidivism.”

Other panelists included John Walsh, United States attorney for the Colorado District; Charlie Beck, Chief of the Los Angeles Police Department and moderator, Bill Keller, editor and chief of The Marshall Project, a news organization that focuses on the nation’s criminal justice system.

Walsh said that federal government has moved away from mandatory minimum sentencing.

“Since 2013, when the Smart on Crime policy was announced by then-Attorney General (Eric) Holder, federal prosecutors have been instructed not to use mandatory minimums, except in cases that really merit their attention,” he said, “in other words, aggravated felons, leaders of drug organizations, violent people. And what’s that’s meant is that our use of mandatory minimums has probably dropped by about 25 percent in that time.”

The president insisted that data would be necessary to counteract the current trends in criminal justice.

“Collecting data, I think, is something that’s going to be very important in guiding us forward,” he said. “We don’t really do a good job right now in collecting national data on a real-time basis, but we now have the tools and the technology to do it better.”

Obama said new strategies being used by police and residents are an example of what can be achieved through creative thinking.

Camden has cameras located around the city that uses software that citizens can use to direct what is being seen for the police, so that the community can help monitor the city. In addition, Camden has implemented a neighborhood officer that must spend 24 hours straight in his or assigned neighborhood to interact with the community.

“Creative work, like, for example, where they know there were hotspots and some gang shootings related to drugs, police officers drive the ice cream trucks, park them where the drug dealing has been going on, giving out free ice cream from the police,” he said.

“Suddenly families are out on the streets, and now it’s creating a space in which it’s a lot harder for you to just be dealing drugs.”

Obama said he also believes legislation is also paramount in reformation. Currently Congress is considering legislation that will reduce federal sentencing, the first of its kind in a decade.

“We’re in a unique moment in which on a bipartisan basis, across the political spectrum, people are asking hard questions about our criminal justice system and how can we make it both smart, effective, just, fair,” he said.

Obama emphasized that the current state of the criminal justice system was not just the responsibility of one entity, such as police, but rather a reflection of the society as a whole.

“If we, as a society, are willing to tolerate very poor neighborhoods with no opportunity, a lot of violence, a lot of substandard education, and then we’re surprised that the police, in interacting with a community that hasn’t been cared for, is going to have tougher interactions, then we’re passing the buck,” he said.