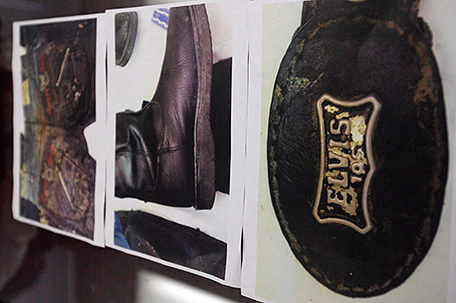 ABOVE PHOTO:  Photos of the belongings of an 11-year-old Guatemalan immigrant whose body was discovered on June 15 are displayed during a press conference Monday June 30, 2014 in Edinburg, Texas. When authorities found the body of the 11-year-old boy in South Texas, a phone number for his brother in Chicago was scribbled on the inside of his belt buckle. The boy, wearing “Angry Birds” jeans, black leather boots and a white rosary around his neck, had come from his home country of Guatemala and apparently got lost in the Texas brush, near the border with Mexico and less than a mile from the nearest home. (AP Photo/The Monitor/Delcia Lopez)

By Jim Kuhnhenn and Erica Werner

WASHINGTON– President Barack Obama faced immediate demands for bold action to stem deportations Tuesday, a day after declaring immigration legislation dead and announcing plans to act on his own.

At the same time GOP opposition to the president’s go-it-alone strategy mounted, setting up an election-year clash with no certain outcome.

It will play out against the backdrop of an unfolding crisis on the Southern border, where unaccompanied Central American children have been showing up by the thousands, fleeing violence at home – an unforeseen development that both sides are trying to use to score political points. Obama says the flood of children at the border argues for the need for overhauling immigration laws while Republicans claim Obama’s policies caused the problem.

At a panel on immigration at AFL-CIO headquarters Tuesday, the labor federation’s president, Richard Trumka, told supporters their next task is to spur Obama to act expansively to curb deportations, which have reached record highs under his watch.

Panelists also pledged to punish Republicans politically for inaction on broad immigration legislation that passed the Democratic-controlled Senate a year ago but stalled in the GOP-run House.

“We will make sure everybody knows that the accountability lies directly at the feet of the House Republicans and Speaker (John) Boehner,” said Janet Murguia, head of National Council of La Raza.

But in a sign of how difficult it will be for Obama to satisfy advocates’ demands, Trumka and Murguia called on the president to provide work permits to everyone who would have been eligible for citizenship under the Senate immigration bill, which would have extended relief to many of the 11.5 million people already in the country illegally. Administration officials have weighed expanding a two-year-old program that gave work permits to more than 500,000 immigrants brought illegally to the country as youths, but may be reluctant to extend it as broadly as advocates demand.

And Boehner and House Republicans, who already have announced plans to sue Obama over his use of executive actions, served notice that more moves by the president on immigration would only stiffen their opposition.

“If the president insists on enacting amnesty by executive order, he will undoubtedly face a lawsuit and will find himself, once again, on the wrong side of the Constitution and the law,” said Rep. Lamar Smith, R-Texas.

Meeting with his Cabinet secretaries Tuesday at the White House Obama said his preference on major policy issues would be to work with Congress and pass legislation. “Whatever we do administratively is not going to be sufficient to solve a broken immigration system,” he said.

But the president contends he has little choice but to act alone. “If Congress will not do their job, at least we can do ours,” Obama said Monday in the Rose Garden.

Seeking to slow deportations while simultaneously stemming the flow of young people across the U.S. Southern border presents Obama with a knotty set of policy choices.

He asked Homeland Security Secretary Jeh Johnson and Attorney General Eric Holder for recommendations by the end of summer on the types of executive actions he could take. Among the steps he could consider would be to focus deportations on people with serious criminal records, something the administration has already tried to do, with mixed results.

For now, White House officials say he will refocus resources from the interior of the country to the border.

Dropping by a White House gathering of immigration advocates who were meeting with his senior advisers Monday, Obama promised he would take “aggressive” steps, according to some participants, but cautioned that he could not match on his own what broader legislation would accomplish.

At the same time, Obama asked Congress for more money and additional authority to make it easier to deport recent border crossers, including the unaccompanied youths from El Salvador, Honduras and Guatemala, and to hire more immigration judges and open more detention facilities. Those proposals found little support in the White House meeting, signaling to Obama and his aides the difficulty he could face managing the labor, business, religious and Hispanic coalition behind the push for an immigration overhaul.

Secretary of State John Kerry flew to Panama on Tuesday where he asked Central American nations to work with the Obama administration to curb the influx of unaccompanied children. Meeting in Panama with the presidents of El Salvador and Guatemala and the foreign minister of Honduras, Kerry said the crisis has reached a “critical time” and urged immediate steps to address poverty and crime, thought to be underlying causes of the phenomenon.

“Tens of thousands of young children are being exploited and are being put at great danger and it is a challenge to each of us,” Kerry said as he met the officials before they all attended the inauguration of Panama’s new president. He called it a “very complicated issue” exacerbated by crime, violence and poverty but blamed criminal gangs and human traffickers for encouraging naïve families to send their children north.