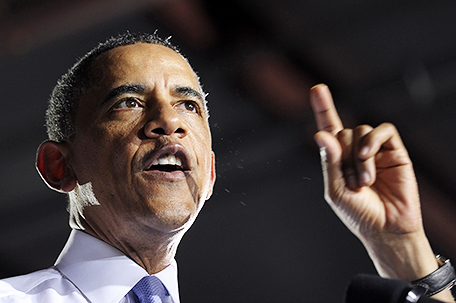 Michelle and Barack Obama issue statement on Harvey Weinstein sexual harassment allegations. Weinstein was a contributor to the Obama campaign. The Obama’s daughte,Malia was also an intern at the Weinstein Co.:

“Michelle and I have been disgusted by the recent reports of Harvey Weinstein. Any man who demeans and degrades women in such fashion needs to be condemned and held accountable, regardless of wealth or status. We should celebrate the courage of women who have come forward to tell these painful stories. And we all need to build a culture, including by empowering our girls and teaching our boys decency and respect, so we can make such behavior less prevalent in the future.”

Weinstein had previously taken an indefinite leave of absence following the revelation of multiple allegations of sexual harassment uncovered in an expose last week by The New York Times. The board announced an investigation into the allegations, saying it would determine the co-chairman’s future with the company.

But the Weinstein Co. board, which includes Weinstein’s brother, fired the executive who has always been its primary operator, public face and studio chief. Under his leadership, the Weinstein Co. has been a dominant force at the Oscars, including the rare feat of winning back-to-back best picture Academy Awards with “The King’s Speech” and “The Artist.” In recent years, however, Weinstein’s status has diminished because of money shortages, disappointing box-office returns and executive departures.