Obama: Any misconduct at VA will be punished 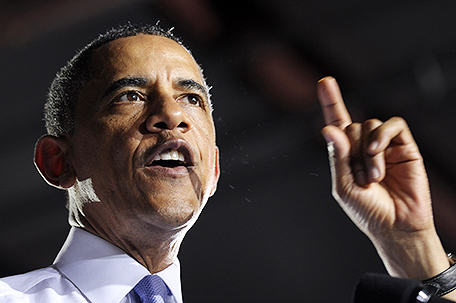 By Matthew Daly and Julie Pace

WASHINGTON– Seeking to head off a growing furor over veterans’ health care, President Barack Obama declared Wednesday that allegations of misconduct at VA hospitals are “dishonorable” and will be not be tolerated by his administration.

“I will not stand for it – not as commander in chief but also not as an American,” Obama said following an Oval Office meeting with embattled VA Secretary Eric Shinseki.

His administration is under mounting pressure from Capitol Hill to address troubling allegations of treatment delays and preventable deaths at VA hospitals. The VA Inspector General’s office said late Tuesday that 26 facilities are being investigated nationwide – up from 10 just last week – including a Phoenix hospital where 40 veterans allegedly died while waiting for treatment and staff there kept a secret list of patients waiting for appointments to hide delays in care.

Shinseki, a retired Army four-star general, is facing calls for his resignation from some lawmakers. Obama spoke warmly of Shinseki Wednesday, saying the secretary had poured his heart and soul into his job, but said there would be accountability if the allegations of misconduct are proven to be true.

“We are going to fix whatever is wrong and so long as I have the privilege of serving as commander in chief, I’m going to keep on fighting to deliver the care and the benefits and the opportunities that you and your families deserve, now and for decades to come,” Obama said.

The president spoke hours before the House was scheduled to vote on a bill that would grant the VA secretary more authority to fire or demote senior executives. The White House has said it shares the goals of the House measure – to ensure accountability at the VA – but has concerns about some of the details.

Obama’s statement marked his first public comments on the matter in more than two weeks. Last week, he dispatched his deputy chief of staff Rob Nabors to the VA to oversee a review of department policies.

Nabors, who also took part in the Oval Office meeting Wednesday, was heading to Phoenix later in the day to meet with staff at the VA hospital at the center of the allegations. His meeting will include interim director Steve Young and other hospital administrators. Nabors plans to submit a preliminary report to the White House next week, with a full report due in June.

The current director of the Phoenix VA Health Care System, Sharon Helman, has been placed on leave indefinitely while the VA’s inspector general investigates the claims raised by several former VA employees. Investigators probing the claims say they have so far not linked any patient deaths in Phoenix to delayed care.

The allegations have sparked election-year outrage on Capitol Hill. The House bill would target about 450 career employees at the VA who serve as hospital directors or executives in the agency’s 21 regions.

Rep. Jeff Miller, R-Fla., chairman of the House Veterans Affairs Committee, sponsored the measure, saying VA officials who have presided over mismanagement or negligence are more likely to receive bonuses or glowing performance reviews than any sort of punishment.

The VA’s “widespread and systemic lack of accountability is exacerbating all of its most pressing problems,” including revelations that the department maintained secret waiting lists to cover up long delays in patient appointments and a mounting toll of preventable deaths of veterans, Miller said.

Miller accused the VA of a “well-documented reluctance to ensure its leaders are held accountable for mistakes” and he said Congress has an obligation to “give the VA secretary the authority he needs to fix things. That’s what my bill would do.”

Shinseki and Defense Secretary Chuck Hagel met with the House Appropriations Committee on Tuesday to discuss how the Veterans Affairs and Defense departments can improve interactions between their health records systems. The two Cabinet members said in a joint statement that the meeting was productive and said both men share the same goal: to improve health outcomes of active-duty military, veterans and beneficiaries.

Meanwhile, two Republican senators introduced legislation to prohibit payment of bonuses to employees at the Veterans Health Administration through next year. Sens. Richard Burr of North Carolina and Deb Fischer of Nebraska said the VA should focus its spending on fixing problems at the agency, “not rewarding employees entrenched in a failing bureaucracy.” Burr is the senior Republican on the Senate Veterans Affairs Committee and Fischer is on the Senate Armed Services Committee.

The House passed a bill in February that would eliminate performance bonuses for the department’s senior executive staff through 2018.

Sen. John Cornyn, the No. 2 Republican in the Senate, also called on Obama to back off plans to nominate Jeffrey Murawsky to replace the VA’s undersecretary for health care, Robert Petzel, who has stepped down. Murawsky, a career VA administrator, directly supervised Helman from 2010 to 2012.

The White House has said Obama is standing behind Murawsky’s nomination.