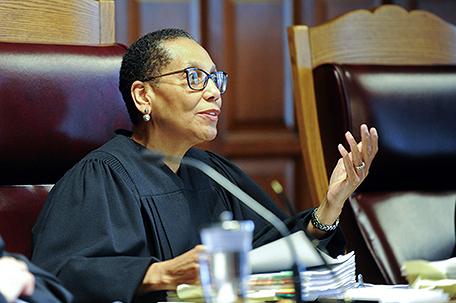 NEW YORK –ABC News reported that the New York Police Department said Tuesday that the death of Justice Sheila Abdus-Salaam, a New York Court of Appeals judge whose body was found on a bank of the Hudson River in Manhattan last week, is suspicious.

The NYPD said it would treat the death as suspicious because there was no immediate indication of suicide or criminality.

“We have a middle-aged woman deceased in the water with all her clothes on, with no signs of homicide or suicide,” NYPD Sgt. Brendan Ryan told ABC News late Tuesday.

“When a body is found floating in a river, it is deemed suspicious in nature. Absent any clear signs of criminality, the cause of death is determined by the medical examiner,” he added.

Police investigating the judge’s disappearance found her meds, according to the court source.

It was unclear if Abdus-Salaam left behind a suicide note, and cops were awaiting the results of an autopsy before saying anything more, the police source told The News.

“There are no apparent injuries to her body,” said NYPD Chief of Detectives Robert Boyce. “It appears to be non-criminal … There is no apparent trauma. No physical abnormality at all.”

Sheila Abdus-Salaam’s body was discovered along the riverside near Harlem on Wednesday, a day after she was reported missing, police said.

Democratic Gov. Andrew Cuomo, who appointed Abdus-Salaam to the state’s Court of Appeals in 2013, called her a “trailblazing jurist.’’

“As the first African-American woman to be appointed to the state’s Court of Appeals, she was a pioneer,’’ Cuomo said. “Through her writings, her wisdom and her unshakable moral compass, she was a force for good whose legacy will be felt for years to come.’’

“Her personal warmth, uncompromising sense of fairness and bright legal mind were an inspiration to all of us who had the good fortune to know her,’’ DiFiore said.

Former Chief Judge Jonathan Lippman said he knew Abdus-Salaam for many years. He said her death of was “difficult to understand.’’

“The court has suffered a terrible blow,’’ he said.

Abdus-Salaam, who was 65-years-old, graduated from Barnard College and received her law degree from Columbia Law School. She started her career as a staff attorney for East Brooklyn Legal Services and served as a judge in Manhattan state Supreme Court for 14 years, according to the state Office of Court Administration’s website.

The president of the New York State Bar Association, Claire P. Gutekunst, said Abdus-Salaam grew up poor in a family of seven children in Washington, D.C., and “rose to become one of the seven judges in New York’s highest court, where her intellect, judicial temperament and wisdom earned her wide respect.’’