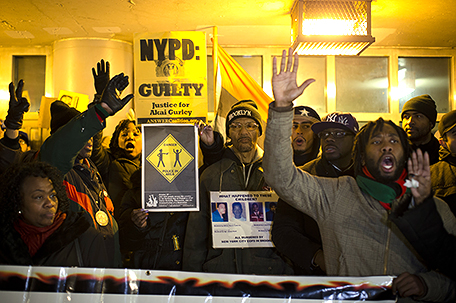 ABOVE PHOTO:  Demonstrators chant as they prepare to march in protest of the shooting death of Akai Gurley by rookie NYPD officer Peter Liang at the Louis Pink Houses public housing complex, Saturday, Nov. 22, 2014, in the Brooklyn borough of New York. Police have described Gurley’s death as an apparent accident. (AP Photo/John Minchillo)

NEW YORK– A New York City police officer who fired into a darkened stairwell at a housing complex, killing a man who had been waiting for an elevator, surrendered Wednesday to face criminal charges.

The man killed in the stairwell, 28-year-old Akai Gurley, was black. The officer charged, Peter Liang, is Asian-American.

Liang, 27, was indicted by a grand jury in the November shooting, according to Scott Rynecki, an attorney representing Gurley’s family, and Liang’s union. It wasn’t clear what charges the grand jury considered; it could be a misdemeanor official misconduct count or manslaughter, a felony.

Liang walked into a police station with his lawyer Wednesday and was expected in court later in the day.

Liang and his partner were patrolling a public housing development in Brooklyn’s gritty East New York neighborhood, on Nov. 20. The housing project, where Gurley was getting his hair braided by a friend, had been the scene of a recent shooting, robberies and assaults.

The officers had descended onto an eighth-floor landing when, 14 steps away, Gurley and the woman opened a door into the seventh-floor landing. The lights were burned out in the stairwell, leaving it “pitch black’’ and prompting both officers to use flashlights, police said after the shooting.

Liang, for reasons unclear, had his gun drawn, police said. He was about 10 feet from Gurley when, without a word and apparently by accident, he fired a shot, police said.

Gurley was struck in the chest.

Patrick J. Lynch, head of Liang’s union, said the officer, who has less than two years on the job, deserves due process.

“The fact that he was assigned to patrol one of the most dangerous housing projects in New York City must be considered among the circumstances of this tragic accident,’’ Lynch said.

Rynecki said the shooting was unjustified, regardless of whether it was intentional. Gurley’s domestic partner and mother of his toddler daughter filed a notice of claim that she was planning to sue the city in his death.