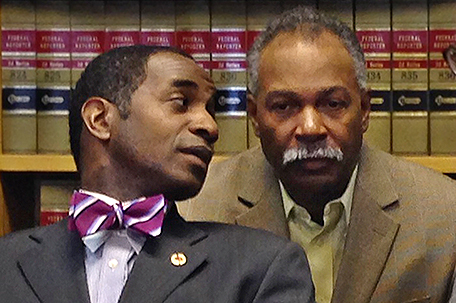 ABOVE PHOTO:  NYC fire department firefighter John Coombs, left, president of Vulcan Society, a black firefighters’ group that had sued the city over racial discrimination and FDNY Lt. Michael Marshall, right, participate in a news conference in New York to announce a settlement of the 7-year-old case, Tuesday, March 18, 2014 in New York. About 1,500 minorities who took New York City Fire Department entrance exams in 1999 and 2002, that were found to be biased, will be eligible to receive back pay totaling $98 million and Marshall will serve as a diversity advocate.  (AP Photo/Warren Levinson)

NEW YORK — About 1,500 minorities who took New York City fire department entrance exams that were found to be biased will be eligible to receive back pay totaling $98 million, a black firefighters’ group that had sued the city over racial discrimination said Tuesday.

The settlement of the 7-year-old case capped a long and arduous legal fight by the group, the Vulcan Society, over diversity in the fire department. In a city where more than half of residents identify with a racial minority group, black firefighters have never made up more than 4 percent of the department’s total.

“This is a great day in the city of New York,” said Capt. Paul Washington, a past president of the Vulcan Society. “And we hope that this is the beginning of a new day for the New York City Fire Department.”

Besides back pay, the settlement includes more than $6 million to cover lost medical payments, fringe benefits and interest for those who took the test in 1999 and 2002. It also allows for firefighters to be assigned to firehouses in neighborhoods where they live. The payment method hasn’t been determined and will have to be approved by a federal judge.

Mayor Bill de Blasio, who has yet to appoint a fire commissioner, and his corporation counsel, Zachary Carter, praised the settlement as a way to diversify stationhouses.

“The brave men and women of the FDNY work tirelessly to keep us safe from harm’s way — and our administration is committed to ensuring every New Yorker who seeks to take on this heroic role has a fair opportunity to join the ranks,” de Blasio said in a statement.

Among other things, the settlement calls for the FDNY to create an executive position for diversity, appoint a uniformed advocate to hear claims of racial discrimination and sets goals for proportional representation and recruiting levels that are higher than the numbers of black and Hispanic members in the community to make up for years of underrepresentation, said one of the Vulcan Society’s lawyers, Richard Levy.

“This settlement is very much about a new administration that was willing to talk about the problem as a real problem that existed and that had to be confronted not just as an issue to defend,” said Levy, adding that his clients offered to settle for $10 million in back pay and changes in the department’s hiring process shortly after the Department of Justice, in conjunction with lawyers from the Center for Constitutional Rights, sued the FDNY in 2007 over the entrance exams.

In a statement, the DOJ commended the city and the firefighters for agreeing in principle to a settlement. The settlement pre-empts a trial that had been scheduled to start this month.

FDNY Commissioner Salvatore Cassano said in a statement the department, which is about 85 percent white, hoped in its next exam to attract even more minorities than the 19,000 who took the last test, in 2012.

Last year, an appeals court ruled that the fire department must undergo court supervision for five years to ensure it doesn’t discriminate against blacks and Hispanics in its hiring practices.

In the fall of 2011, federal Judge Nicholas Garaufis appointed an independent monitor to oversee the recruitment, testing and hiring of new firefighters for at least 10 years.

Garaufis took the unusual step after concluding the city had failed to ensure that enough minorities were hired.

The FDNY launched a recruitment campaign in 2012 aimed at attracting more female and minority applicants.

The principles agreed to in the settlement were encouraging, said John Coombs, the president of the Vulcan Society, but he cautioned that real, cultural change within the department was the group’s ultimate goal.

“Truth be told, we have yet to see the change,” he said. “We would hope with the new administration going forward they appoint the necessary positions, starting with the commissioner, starting with the advocate and the person to oversee the recruitment. That is a great first step, but it is going to have to be constantly monitored.”